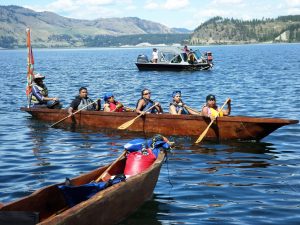 Not to get all nostalgia on you, but the theme that seems to tie this month’s string of days together is memories. Perhaps it’s because I think I am getting close to creating something that has been on the drawing board for 8 or 9 years, a history tour that you can take with you on your cell phone. (Notice how they aren’t really cell phones or “Smart phones” any more, they are “mobile devices”.) The trick is that in most places around here there is no cell coverage, so you can’t link to the Internet to get a story about your location. More about the technology later, the thing is there are a lot of stories associated with the places in Northeast Washington that need to be remembered by visitors and residents alike. 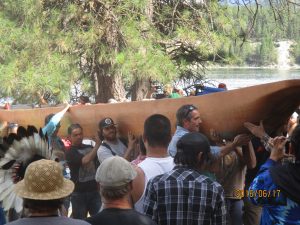 None is more central to where we live than the loss of the salmon fishery at Kettle Falls and thousands of years of Native culture that went with it. So it was inspiring on June 17th to be with the people, mostly Tribal, who gathered at Mission Point where St Paul’s Mission was built above the Kettle Falls on the Columbia, to watch newly-carved long dug-out canoes paddled by members of 5 tribes (more really), some of them coming more than 100 miles over 10 days to gather together for the first time in nearly 80 years both to remember the “Ceremony of Tears” when the waters of Lake Roosevelt flooded the falls in 1940 and the salmon stopped running blocked by Grand Coulee Dam, but also to recognize a new hope symbolized by the canoes, built mostly by Tribal youth, that a new International Power Treaty will recognize the need to return the salmon to their spawning beds going far into Canada and that new methods to move the returning salmon past the dams can be effective.

Not that that was the only thing that happened in June 2016, but it was powerful to be there when the drumming on the West side of the river was answered by more drumming from our side where a young man was offering a prayer in Salish in a ceremony led by Shelly Boyd, wife of Jim Boyd, the elected head of the 12 Colville Tribes and a world famous musician. We heard him play and sing at the Museum near St Paul’s Mission last winter and 5 days after this ceremony, he died of a heart attack. It was an end and a beginning.

There was also a big reunion on June 5th in Rose Valley where I lived from 1974 to 1984. It fit well into the first 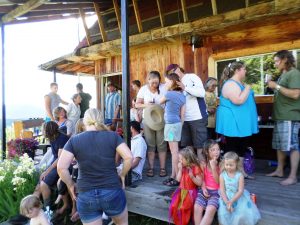 stanza of the lead song “What’s too painful to remember, we simply choose to forget.” Too many stories for a blog… 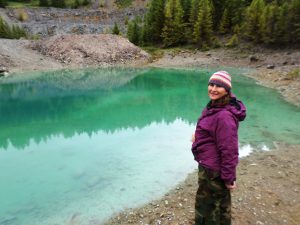 April at the Lonestar Pool

Soon after that, June 18th, I celebrated Fathers Day on a traditional rockhounding trip with my daughter April. Unlike some of our past trips, it was fairly successful. We left tin cans in the Lonestar Mine pond hoping to return and find them coated in copper like miners did a century ago. We failed to find the City of Paris cave shown on USGS Topo maps, but we’ll be back and better equipped to check the cans and the cave. Then we explored a rocky meadow near Franson Peak in the rain finding pieces of agate among the wildflowers. Another day to remember…

One last end/beginning was the farewell dinner at Lovitt Restaurant. 7 tasty courses, a bottle of our 5-year-old Lucie Kuhlmann wine, a lot of pictures and a lot of our friends. Norman and Kristen Six and their two daughters, 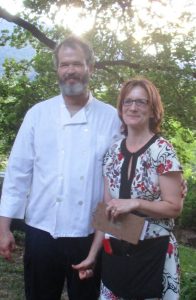 Paige and Norma Jean are moving on, but we hope not too far away, to start another restaurant probably in a building that is not over 100 years old and in need of serious repair. 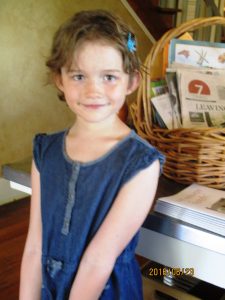 A lot of work was done in the garden, the vineyard and the office in June. All the vegetables are transplanted, the grape crop has gone from the size of BBs to the size of peas and it is big. A new edition of the Road Atlas of Ferry County is out and selling well after over a thousand changes to road lines and addresses. The little pie cherry tree in the front yard gave us over 4 gallons of cherries – some of which are now in a 4th of July pie. We picked 31 pounds of strawberries at Winniford Farm and they are now sliced, frozen individually and 5 gallons bagged up in the freezer. There were very hot days and very rainy ones. But most of that will 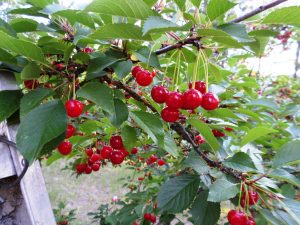 be forgotten when we look back on the way we were. 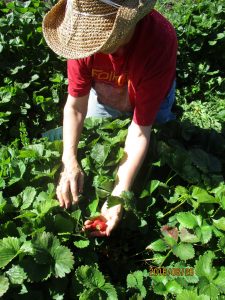 One Response to Memories