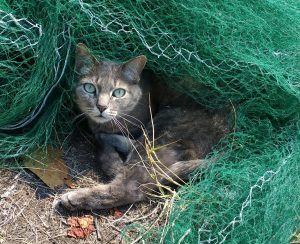 When a pendulum swings it pauses at either end and quickly passes through the middle. August is the middle. Things are changing quickly. We have gone from some of the hottest summer days on record to days of giant swings between the high and low temperatures. That part of our weather is actually good for grapes and wine. Not so good were a few days of suffocating smoke that might affect the wine. 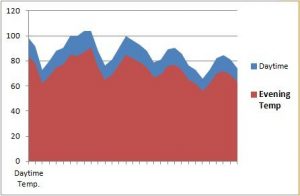 Rachel Carson’s book Silent Spring was published in 1962 warning of mankind’s impact on the natural world. 66 years later this last month has me wondering once again if we have not permanently impacted wildlife. After spending parts of many days putting up bird nets over the grapes, virtually no birds showed up, just a flock of robins apparently looking for bugs in the new mulch. I’m hoping that it is only a temporary aberration because of smoke but smoke has become the norm in the past few years. I also worry about wasps and yellow jackets this time of year. They were going strong all summer but now seem to have faded away.

At least the crickets are persistent, maybe too persistent. They set up a steady drone in the evening with a pulse of solo artists nearby. We have a frog somewhere behind the refrigerator that pipes up around dinner time. The crops are doing well, I dried a couple gallons of 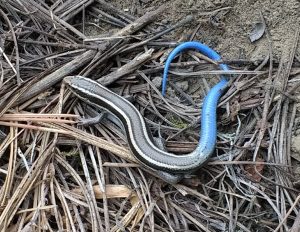 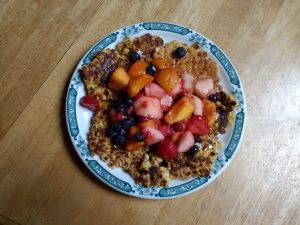 With the fruit there is also fresh corn and the combination makes for our favorite breakfast: corn fritters and fruit. The recipe is simple. One ear of corn kernels, one egg and several teaspoons of flour. Mix them all together and fry. Flip after a minute or so and in another minute you should have a fritter nicely browned on each side, ready for butter, maple syrup and fresh fruit. Multiply the ingredients to suit your appetite. Serve with a white desert wine. (Just kidding about the wine). 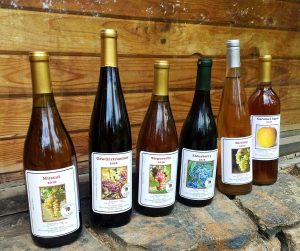 But speaking of white wine, August was a great month for filling out our white wine selections. The Muscat has a surprising hint of citrus and was great with Copper River salmon last week. For the first time ever we have some extra Gewürztraminer to sell with it’s unique fresh flavor. Siegerrebe, a crisp semi-sweet white wine, has been popular all summer. A new addition is elderberry wine which many people have heard of and some rave about. We are almost out of the limited release of Riesling for 2016, a wine I am very proud of, refreshing but not too sweet or tart. And finally, Caramel(ized) Apple Wine that seems perfect for Fall. 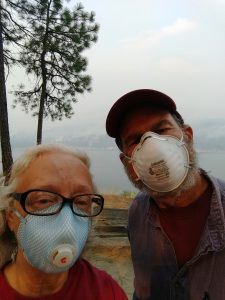 Boyds fire in the background

The beginning of August brought us drought and record-breaking heat with at least a couple of days reaching 104. We could work outside in the morning or evening, but inside our underground house or straw bale office were the best places to beat the heat. Heat became the least of our problems on August 11th, when a fire broke out across the lake from us and 10 miles to the north, said to be caused by a tree blowing over in 40 mph winds and hitting a power line. The “Boyds Fire” was really mostly near Barney’s Junction, Noisy Waters and Nancy Creek, not Boyds.  But apparently we cartographers are the only ones fussy about names. Over the next couple of weeks it grew to nearly 5000 acres. 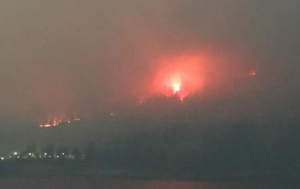 The morning of the 12th we drove to the newly opened hardware store in Kettle Falls and bought a box of N95 breathing masks. Then we drove out to St Paul’s Mission to look at the fire burning on the other side of the lake. Several homes burned, some owned by people we know. Many others lost power and had to evacuate, including our mailman. Ultimately it became a project fire with 400 firefighters. The whole town of Kettle Falls seemed to be a fire camp. We put icons for air quality on our phones and watched as it crept past unhealthy to very unhealthy and hazardous. We wore breathing masks for the limited time we spent outdoors and still keep sprinklers on around our buildings. When you can barely see across the street because of the smoke, you are always worried that there may be a new fire nearby that you just can’t see. Finally, two weeks later on August 26th it rained enough to wet the ground and clear the air. 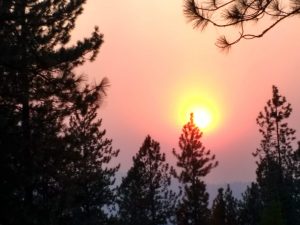 Great Sunsets in the Smoke

The sun was a red ball in a gray sky at sunrise and sunset. Even the moon was red and the stars mostly disappeared. Now we are thankful for the crisp air and the blue sky. Signs reading “Firefighters Rule” have sprouted up everywhere, (along with all the political signs of course). Despite articles circulating about “smoke taint”, we have started to harvest grapes, and they taste great. The “tyranny of the harvest” has begun and we are glad to work outside again.