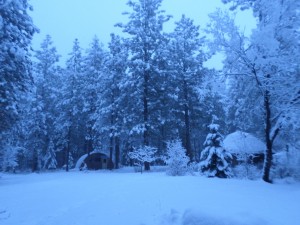 A big question going into the winter was “Will we get enough snow?” El Nino jumped on that one and we have plenty of snow. My new barometer has been shifting up and down as systems move in and out building up over a foot of snow early in the month, with much more than that at higher elevations.

After a snowstorm you sometimes get a clear sky in the morning and the light before sunrise turns the whole landscape blue. I’m including a couple of pictures and a video of snow falling – but not blue. The beauty of snow and the problems it causes make a fitting background to the rest of this blog. 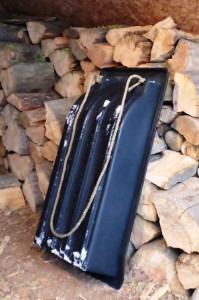 I bought a new Otter Sled that really helps move things around in this weather. On January 6th a log truck didn’t move around so well and dumped a load of logs just south of Rice, Washington. Cheryl had two pictures she took of the wreck posted on a Spokane TV webpage. Also not so much fun was the power outage on January 26th that lasted half the day or the outage in Kettle 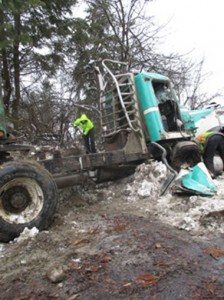 Falls that took down the Crossroads Websites in December (More about that later on.)

Do computers affect the way you think? I typed that question into Google and got 60,900,000 responses. Evidently even computers round off the results when convenient. For years I have been keeping a diary, which eventually gets transformed into blogs, which eventually turn into the Christmas newsletter. I found a simple app called Journal for my Galaxy Tablet. Then I discovered that I could write an entry just by talking to the tablet. It doesn’t get everything right, but does figure out a surprising amount. I could just paste all those ramblings into a blog with rather random results. But I am going to round off the results to make them more convenient.

Cheryl and I watched 3 movies this month: Sisters, Star Wars VII and The Revenant. Like all interesting stories, there was a lot of conflict going on in each – and varying amounts of humor. I’m sure each of them started out with a lot of writing. We also watched some of the final games of the football season and of the Australian Open Tennis Tournament. There was not as much writing involved creating those conflicts, but plenty afterward.

I reflected on that since I have been doing a whole lot of writing this last month myself. I made more progress on my father’s biography than any time since last January. I wrote an article for the North Columbia Monthly on the Germania Mine and it’s part in World War I.  Plenty of conflict there. I also helped write an article about the history of the Panorama Gem and Mineral Club and the January Newsletter for the club. Even there you find rockhounds overcoming adversity to reach their reward. So (unsurprisingly) there are some conflicts and resolutions in this month’s blog.

I am dealing with one long-standing unresolved problem by remodeling the bathroom part of this office/tasting room. When I remodeled the main office to create a tasting room last year, I moved two file cabinets full of old 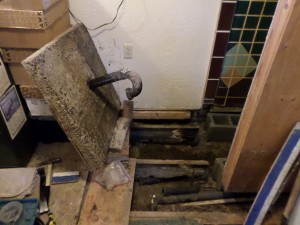 records into the bathroom. They increased the load on two floor joists that were already sagging with the weight of a 200 lb slab of concrete under the shower. The shower leaked and rotted part of the joists. I had two main challenges, 1. Go through records in the file cabinet dating back 30 years saving some and recycling others. 2. Move out the shower slab and remake the foundation so that it didn’t sag and it would never rot again.

From the first challenge, I learned that things that are worth saving are ones that show how significant things came to be later on. Old manuals and project paperwork didn’t make the cut. Pictures and stories did.

From the second challenge I learned that it can take a lot longer to fix something done poorly than it would have to do it more substantially the first time.

In a power outage last December the hard drive on the Crossroads Archive website died. Our Internet Provider, Scott Hirsch, at Secure Webs was able to revive it on a new server. That was a huge relief since the site took three years to build with a federal grant and hundreds of hours of volunteer labor. It gets about 30,000 visits a year but we have not added material for that last 3 years while trying to resolve a dispute with the Stevens County Government, who administered the grant. As President of the Heritage Network I asked the county to release its interest in the website so we could add more material to it. The county had used grant money to purchase webserver hardware for the website. They replied that would constitute “gifting”, because it is illegal for a government agency to give resources to a private entity. Since after the power outage and the server replacement the site was no longer running on hardware tied to the grant and since from the beginning our group has paid for the domain registration out of our own pocket we thanked the county for their support and said we would continue to manage it on our own. 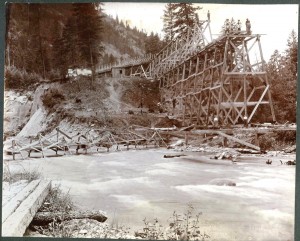 We were shocked three weeks later to get a letter from the county commissioners demanding that we turn over both the expired hardware and control of the site to them by the end of the month so they could shut it down. After I calmed down a little, I composed a reply with a series of facts detailing how the county had refused to provide a site for the information itself and we were forced to create it from scratch with our own money and labor, and that they never owned or operated the website and it had never been “gifted” to them. The Heritage Network board reviewed the reply and we gave the expired hardware and the reply to the county. It’s been over three weeks and the month is over. There has been no response from the county. I hope that conflict is resolved too. 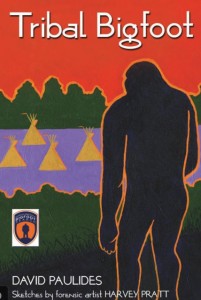 I also paid taxes and filed reports to the State and the Feds for the winery. I’m not generally opposed to government. But it leads to the last subject in this blog, Predators. Now that the snow is frozen, turkeys and coyotes can run over the snow. Eagles cry from their roosts near the bay every morning and a few nights ago an owl flashed by our kitchen while our cat was contemplating pushing through the clear pet door. I’ve been reading accounts of encounters with Sasquatch during the last 200 years in the book, Tribal Bigfoot. There are hundreds of websites dedicated to the topic and a TV reality show. Still they remain illusive and that’s a good thing for both species.

Not as illusive and not nearly a good thing, my sister circulated a report from the Archdiocese of Seattle on 77 priest pedophiles from it’s ranks. It included a list of the different parishes they had worked in. So many transfers indicate a long-standing pattern of complicity in covering up this problem. All of my family knew one or more of them. In the real world the movie is never over. But at least January is.

Posted in Blogs on 4 February 2016 by barrecavineyards
2 Comments »

2 Responses to The Blue Light Special