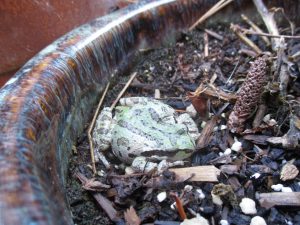 Frog in a Flower Pot

The title pun compares the burst of farming activity this April to emergency services. Actually there was a bit of both this last month and an inordinate amount of photos to go with each meaning. So sorry folks, this is a long blog to slog through. We have only had a few fires in the heating stove since April first. Many days have been above 80 degrees. There has been a little more rain than last year, but not nearly enough.

So Spring has been bursting out all over. The bluebirds are back in their cat-proofed bird house. We found a frog sleeping in an outdoor flower pot. Humming birds are demanding sweet water and butterflies, bees and all manner of insects are out and about. Early in the month grapes needed to be pruned and fruit trees dowsed with dormant spray as usual. But I decided to strengthen the trellis on all of my grape vines since many have been sagging under the weight of big harvests and the failing of the bamboo stakes put in the ground 10 years ago. Those have now been replaced with over 200 pieces of rebar bound tight to newly braced and tensioned support wires. This all took much longer than the usual Spring pruning and there was still a lot to do but Cheryl and I needed to get away before an even more intense summer schedule kicked in.  (Link to Spring Album) 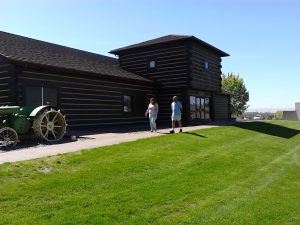 We left for a whirlwind tour of mostly Northeast Oregon on April 5th. We focused on the basics, wine and chocolate. The first day of our trip we wound our way through the rolling Palouse wheat fields to Walla Walla where we had arranged a tasting pairing chocolate from Petits Noirs, a “boutique chocolatier located in the lush region of the Walla Walla Valley, where vineyards and fruit orchards scale the fertile terroir,” and a selection of wines from Barreca Vineyards. After camping in our 1984 VW/Westfalia Van at the remote Harris County Park with our dog, Gretchen, we spent much of the next day drinking wine and eating chocolate with Lan and James Boulanger, friends of our daughter Bina Brock. Refreshed in body and spirit and having traded a lot of wine for chocolate, we left feeling perhaps a little younger, or maybe just buzzed and wound our way up into the Blue Creek Burn, a 2015 forest fire just outside of Walla Walla. We were too early to find morel mushrooms, but just in time for Spring greens and wild flowers. We camped on a spur off the main road up Klicker Mountain overlooking hundreds of miles of Palouse fields and the twinkling lights of cities and several wind farms. 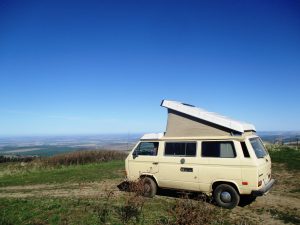 We awoke the next morning to the sound of a crawler tractor working its way up the main dirt road. A while later a pickup truck came down the mountain and turned off into the meadow where we were camped. It turned out to be 88 year old Bob Klicker, who still owned the mountain. He said we could camp as long as we wanted and we talked about his family’s history there. But we didn’t stay, we wound our way back down the mountain and over to the Fort Walla Walla Museum for a brief visit and then turned south through Milton-Freewater and eventually onto I-82 for a fast trip to Baker, Oregon. We hoped to get to the Forest Service office in time to ask about where to look for mushrooms. But it was closed. As we were about to leave, the last guy out of the office pulled his old pickup back into parking lot. He turned out to be the district ranger and suggested that morels were growing on Dooley Ridge and that the meals were good at a nearby brew pub. After a good meal and driving perhaps the most winding paved road I have ever been on, we found a spot to camp below Dooley Ridge.  (Link to trip photo album) 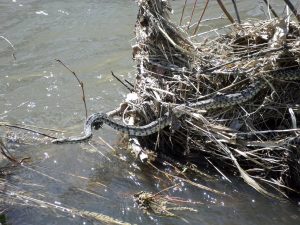 After a cold night and a pleasant but fruitless search through the burned forest for mushrooms, we went back over the winding mountain pass and stopped in Sumpter for supplies. This old mining town had not quite defrosted and roads to any interesting mines were snowed in. We checked out a roadside “museum” of old mining equipment rusting in the sun and then drove on to John Day, Oregon, and the Clyde Holliday Oregon State Park. It had beautiful flowering trees, mowed lawns and paved RV hookups next to the nearly flooded John Day River. It was also nearly full and we pulled into a less-desirable RV slot while we picked out a better one and registered. When we went to move the van, it wouldn’t start, triggering the first real “emergency response” of the month. After moving most of our stuff out to open the engine compartment, I discovered that some rubber air ducts had shaken themselves free of the carburetor. In a short time and without tools, I had them back in place and the van running again. So we drove it to the 1188 Brewery in John Day.

The next day we ate breakfast at the Snaffle Bit restaurant, which turned out to have WiFi service. I caught up on email and filled up on French Toast and sausage while Cheryl talked about Australian cattle dogs with another customer and dined on California eggs Benedict. Then we headed out to the recently built Thomas Condon Paleontology Center and Museum on the Sheep Rock Unit of the John Day Fossil Beds. We learned a lot about the evolution of mammals in the 44 million years since the mass extinction of dinosaurs. The very new museum was fascinating and the scenery spectacular. (See album) We returned to Clyde Holliday for the night. About 11 PM a very loud siren went off for a very long time. Cars sped one way past the park 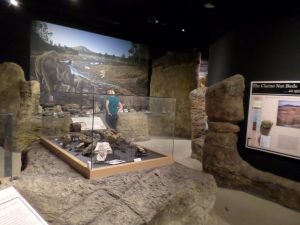 then fire engines sped the other way. As the sirens died down coyotes picked up the tune and were soon joined by local dogs. We learned the next day that a cabin had burned in the hills but the family got out safely. (emergency response #2)

We made our way north over Highway 19. This again is a spectacular highway with campgrounds we didn’t know about and stopped at the town of Fossil, OR and the Oregon Paleo Lands Center which according to tourism guides was a jumping off place to a nearby dig where you could find ancient fossilized plants and animals for yourself. But we sat down to talk with the pioneer of fossil collection in Fossil, Karen Masshoff, and learned that the town really did not want to support it’s namesake, heritage or evolutionary science of any kind and that the fossil site was a mess of clay and discarded pieces of rock. We moved on to camp at Cottonwood, “Oregon’s newest campground”. Overnight camping was in the “One Tree” area, which was aptly named for the one old pine tree along the John Day river. It was a windswept and desolate place, especially compared to Clyde Holliday. But it had towering basalt cliffs and a rugged beauty that we enjoyed on an early evening hike. we stayed for the night.

The next day we ate lunch in Condon, OR, perched in wheat fields and a wind farm above the Columbia, then crossed into Washington and did laundry in Goldendale. The drive over the pass into Toppenish went fairly smoothly but on the freeway from Yakima to Wenatchee the van started gasping for fuel again and we barely made it to a rest stop overlooking the Yakima Valley. Examining the carburetor, I noticed that the governor linkage was sticky. Cheryl gave me her trusty can of Ballistol lubricant and I dowsed it liberally until it seemed free. (emergency response #3) From there we drove without incident to Ellensburg and then over Ryegrass Pass to Vantage where we camped at a very spiffy and expensive Washington State campground right on the Columbia River backed up by the 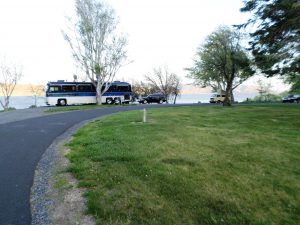 Our van is under the green tree.

Wanapum Dam. We parked next to a huge motor home with Alberta plates, a satellite dish and a new SUV towed behind. I couldn’t help but remember the Wanapum name for White people is “Upsuch”, the greedy ones. Just after dark I stepped out on the bluff overlooking the lake and heard children calling for help and crying. I walked over with my headlamp on and gathered together a couple of boys who had misjudged the way back to their camp from the beach. After some talking and walking back to the main campground, I realized that they were from a boisterous group of children with several tents and took them over there. The adults were out looking for the lost boys and the other children sent a couple of kids after them yelling “We found them.” I didn’t wait there for the adults. (emergency response #4) It was an incredibly windy night that sounded like a hurricane. We had to lower the lid on the camper so the canvas wouldn’t tear.

On April 12th, we headed out for breakfast at George and found that Martha’s Restaurant had closed. Moving on to Ephrata and hoping to find a good country breakfast, we drove down a side street to look at a place that turned out to not have hot food and were headed back toward main street when flashing red and blue lights appeared right behind us. A county sheriff pulled us over for not making a full stop. He turned out to be okay, didn’t issue a ticket and recommended the Country Deli as a good place for breakfast although he confessed to us that he had celiac disease and couldn’t eat there. We did and it was perfect. (emergency response #5) We were glad to get home early in the afternoon and deal with things like my 192 new emails. 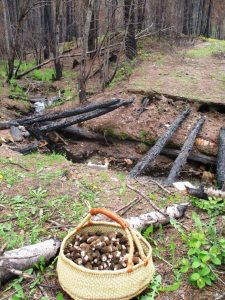 Morels in the Carpenter Road Fire

While we had been gone, Spring had emerged bigtime. The vineyard had turned green and the asparagus had popped up. Tulips and lilacs were in bloom as were the cherry, apple, peach and pear trees and the forsythia.  (Link to Spring Album)  The critters were feisty. Gray-C released a mouse in the house a couple days later and a towhee attacked it’s own image reflected in our shiny stove pipe. After one more failed attempt nearby, we picked hundreds of morels in the Carpenter Road wildfire area and ate rib eye steak with morels, garlic and asparagus for dinner.

On the last day of the month I woke up to the sound of what turned out to be a diesel fire truck parked across the street from our place. I walked down there and found out that a 13 year old runaway girl had slept in the grass near our neighbor’s driveway. Someone had seen her lying there and called 911. The local fire department was the first to arrive. One of them talked to her and sat on the ground leaning up against the guard rail with her. She was wrapped in a blanket. Several other firemen talked with each other nearby until a Sheriff Patrol car arrived and drove off with her to the south about an hour later. (emergency response #5). That was the saddest of all. We were glad to be back at our home and she wanted to leave hers for good.

Posted in Blogs on 8 May 2016 by barrecavineyards
One Comment »

One Response to Emergent Spring Response