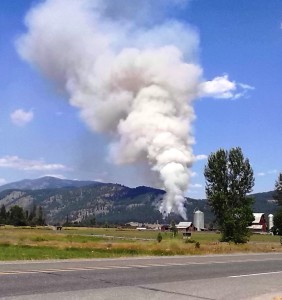 We knew it was hotter and drier than ever early in the Spring. Luckily our water never gave out – though it sputtered if we had 3 sprinklers going at once. I was watering the grapes every day and Cheryl was watering the house, yard and grounds most days. On July 3rd I was going to Colville to shop and there was a thick column of smoke streaming up a mountainside a mile or so from town. I took some pictures. By the time I was returning, a plane and some helicopters were on it. It was controlled in one day but stood as a stark reminder that the next day, the 4th of July, was not a good day to set off fireworks. We were afraid some fool would do that near us on Lake Roosevelt. But no one did. It was the quietest 4th of July ever. Even the fireworks show scheduled in Colville itself was called off.

Three weeks later, I was returning from a trip to Ephrata with a van full of wine making equipment when I saw another column of smoke 10 miles south of us on the Addy-Gifford road. There were already planes scooping water out of Lake Roosevelt and attacking the fire. Again the fire did not spread far before being stopped but destroyed structures and shut down the Addy-Gifford Road. 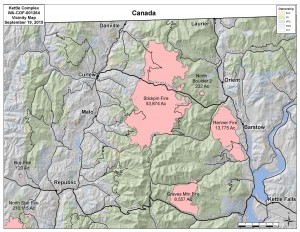 But fires had started in earnest on Lake Chelan and in Okanogan County West of us. And on Boulder Pass between our home and our daughter, Aprils’ near Curlew. By August 2nd we were breathing their smoke. As those fires grew, the weather became unsettled. On August 11th, lightning from thunder storms in the Kettle Range created the Stickpin Fire. Soon that one was joined by the Graves Mountain and Renner fires to create the Kettle Complex, which grew to 73,392 acres. It is now contained but still smoking. 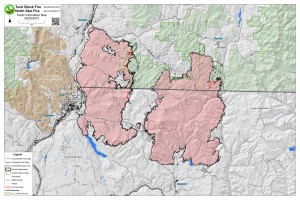 2 days later the human-caused North Star Fire started on the Colville Indian Reservation a little over 30 miles southwest of us. It grew to 218,138 acres and threatened to burn the town of Republic, County Seat of Ferry County. Nearby the Tunk Mountain Fire took off, and eventually burned 165,918 acres almost joining the North Star fire. 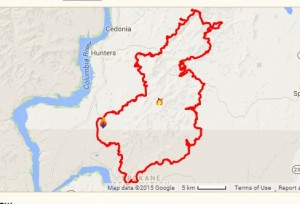 The next day, August 14th, the Carpenter Road fire, another human-caused fire started on the Spokane Indian Reservation, 30 miles directly south of us. Another fire started on Gold Mt, 12 miles north of us and knocked out power to the town of Kettle Falls. It also burned an outbuilding of our friend Amy Kegel. They called in firefighters from Montana and gave them a police escort to come here and fight it, because all of the local resources were on other fires already. 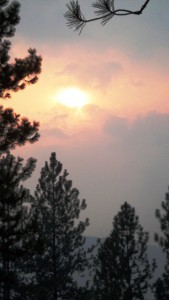 The valleys filled with smoke, the ghosts of dead forests from the mountains around us. We wore breathing masks outside. Ash rained down on buildings, cars, the garden… Fire camps sprung up in Colville and Kettle Falls. You would see helicopters and planes flying here and there to fight the fires. Cheryl’s cousin Kathy had to evacuate to avoid the Carpenter Road Fire. She then lived with her sister, Pat, in Chewelah for weeks. Cheryl met our mailman at the laundromat. He and his wife had to evacuate their home on Deadman Creek in the path of the Kettle Complex. Their place was saved but fire came right to the edge of their field.

By August 21st, we were preparing for evacuation ourselves. We stacked up our most valuable possessions ready to load them into vehicles and head for a wide-open paved area nearby. I helped the local fire district print cards with the 6 “P”s, People and Pets; Papers (phone numbers and documents); Prescriptions; Pictures and memorabilia; Personal Computers and drives; Plastic credit cards and cash. Fire Districts in all directions were asking for more map books, and my printers were broken (see breakdowns blog when it’s written). 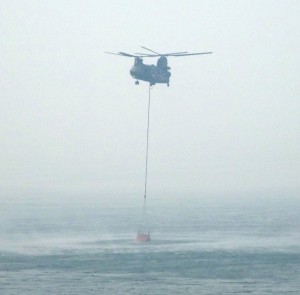 Chinook Helicopter – You can’t see across the lake.

On August 27th we heard a giant two-rotor Chinook helicopter come through the smoke and hover for a long time over the little bay on the lake near us. We thought a new fire must have started nearby. The smoke was so thick you could not see across the Lake. I drove down and took some pictures. In the end I think they just flew out from the helicopter base over the hill in Colville, and headed for the closest water so they could practice using the bucket.

Everyone was jumpy. We cleared the pine needles from around our buildings that had built up there for years. We checked the Incident report and a facebook page on local fires several times a day to keep up with the action. Signs appeared in businesses and driveways everywhere thanking the firefighters. Evacuation shelters sprung up in many high schools and even some of them had to be evacuated themselves. Some friends of ours lost their homes. But we all chipped in to help with food, clothing etc. The fire fighting centers had to start refusing any more food and supplies. Communities from Western Washington sent semi-trucks loaded with provisions. The county set up an emergency communication center in the courthouse. 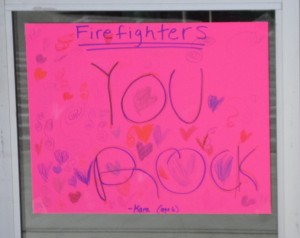 On August 30th there was light rain without thunder storms. The smoke cleared. It did not go away entirely. You could smell it in the still of the morning. But essentially it was over. The big fires will smolder in their centers until snowfall. We could still have more, but the days are cooler and the air is clear. We can literally breath a little easier and hope we never see a summer like this again, and plan to be more prepared if we do.

Posted in Blogs on 30 September 2015 by barrecavineyards
One Comment »