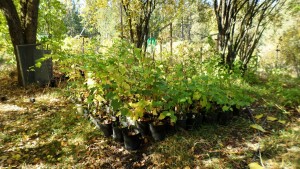 Vines under the Elm tree

So much has happened and is happening with the winery that it is hard to know where to start. I’m scheduled to give a talk on growing grapes organically at the Tilth Conference in Spokane this November.  So I think about that while I am out picking grapes or some other task in the vineyard or winery. I’ve been making wine for 40 years and growing grapes for 28. A lot of what I have learned is by making mistakes. That may not be the most welcome message for a conference on growing organically but it’s honest. In keeping with that tradition, I made a few more this year and have some “experiments’ in the works that may also turn out that way. But basically I am bringing in another crop that should earn some money in two or three years when the wine is ready.  The grape starts look happy in their pots in partial shade.

Dedicated readers may remember the video in the first part of the blog on “Critters”.  It shows a swarm of white flies over our apple tree. Leaf hoppers have traditionally been the problem bug in the vineyard, so I wasn’t ready for this year’s invasion of white flies. It is probably another result of a warmer climate, certainly a warm winter and dry summer. It took awhile for me to realize that I needed to spray Neem Oil to control the flies and I lost a lot of healthy leaves before I did. 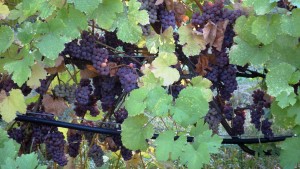 Gewurztraminer nearly on the ground

I did realize that I needed to water steadily since it has not rained significantly all summer. Our well held up as I had a travelling sprinkler going almost every day all day in the vineyard. The vines responded with a heavy crop that kept pulling the canes down till they were in the range of the sprinkler (not a good thing). I kept tying them back up but next spring I really need to revise my whole trellis system.

Word got out that I am willing to recycle wine bottles by washing, inspecting and sterilizing them. Now my supply of used wine bottles has far outstripped my capacity to keep them organized. I’m actually sorting out cases of bottles by the winery they came from so that I am using identical bottles for each of the batches of wine. I’m sure that I have well over 1000 bottles that still need sorting out.

It was a good year for cherries, but a bad year for bears. As noted in the “Critters” blog, we had to chase one away from our cherry tree. Later we had to chase it away from the whole garden. At least I have not had to sleep in the orchard like our neighbor, Jeff Herman. There were so many cherries that John Crandall at Riverview Orchard could not sell all the organic cherries he had. So He gave me 400 pounds that I crushed and am making into wine. To make that work without adding sugar, I borrowed a gas burner, commonly used to deep fry turkeys, from my son-in-law Tony Houston and cooked down part of the juice to boost the sugar to where I wanted it.

By the middle of the summer it became obvious that I would not have enough carboys this fall to handle the new crop of grapes. I found a small winery in Euphrata that was going out of business and bought a van load of carboys plus a lot of other equipment and supplies from them. They barely fit into our Volkswagon Vanagen but I’m going to need almost every one. What is not so obvious is where all these will go by the time I have them full of wine. 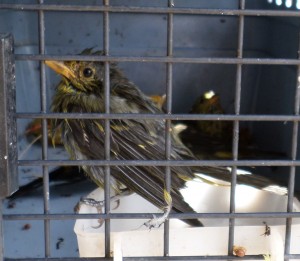 I was determined to get nets that would not snare so many birds this year, which I did. But it took a lot of work to measure and cut them and to shorten a lot of my trellises to make them fit. By the time I had somewhat finished, the birds were on to the fact that the grapes were ripe a month ahead of schedule. But I was not on to the fact that they would be eating varieties of grapes that were never ripe enough for them to be interested in in years past. New nets arrived on August 4th. On August 30th I exported a record 10 birds that I caught in the nets. One trick I learned was that if you soaked the birds with a garden hose while they were in the nets, they were much less likely to get away from you when you lift the nets. The birds were not too happy about that, but at least they lived. During the fires, there were not many safe places to be a migrating bird.

On August 5th Cheryl and I put up a new canopy and sold wine at the Northeast Washington Farmer’s Market. We can’t do tastings there, but that might be a good thing. We don’t end up with any open bottles to finish off ourselves. We have also been selling fresh grapes and some map books. The market has been a whole new social experience for us as 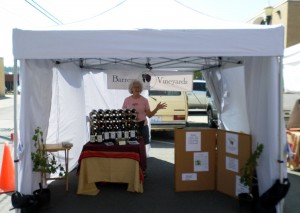 First Day at the Farmer’s Market

well as an economic one. Our inventory changes slowly as we sell out of one batch of wine and have to bottle and label another one. With most of our inventory in 5 and 7 gallon carboys, each one seems to take on a unique flavor profile of its own, which we try to describe to our customers. 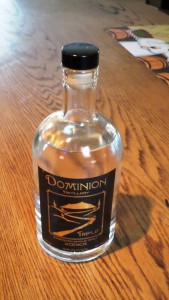 In another new twist for us, we brought some of the left over mash (skins and seeds with the wine drained out but not pressed out) from making wine to Henry Anderson at Dominion Distillery in Colville. He made Grappa, an Italian wine liquor, out of it. It is very smooth and tasty. We plan to do more of that.

We have been harvesting and making wine for a month now. Birds did a lot of damage but they did not wipe out the whole crop, as they did in several of the backyard vineyards around us. Just as damaging but mostly unseen, were raccoons. Someone hit and killed two young ones and left them at the foot of our driveway on August 13th. At the end of September our dog treed one near the same spot and I caught the bright reflection from my flashlight of two yellow eyes 30 feet up in a pine tree. I could see where they had gone down the rows under the nets picking the low-hanging fruit furthest 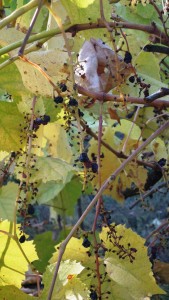 Grapes gone to the wildlife

away from places I usually walk. Once in awhile they would climb into the vines and snag every grape within reach.

With the grapes ripening early and some people who said they would help pick not showing up, a lot of grapes are getting sweeter than ever before. One friend, Kit Shultz, did help but his wife’s cancer diagnosis but them on a 90 day chemotherapy regime a couple days later. For many years now, getting the grapes sweet enough before frost was the challenge. This year, even my “global warming” grapes are getting too ripe. This makes it harder to produce dry wine, which the Market is showing us many people prefer. I’m hoping to balance that out with yeast that converts more sugar into alcohol, making a dryer but stronger wine. In a few years we’ll find out if that works, or if I am making another mistake. In farming, like warfare, you only seem to be equiped to fight last year’s battles.