Look out your window 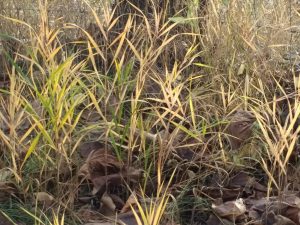 Bob Dylan, Traveling Wilburys – Inside Out

So October was “kinda yellow” from the get go. It involved a lot of chilling out from 62 degrees in the evenings at the beginning of the month to 41 degrees and some frosts at night near the end. At first I would bundle up at 50 degrees. This morning it was 44 and I put on a Carhartt vest over my inside cloths and did my chores. No big deal. I guess my blood is getting thicker.

The leaves turned yellow and most of them have fallen off by now. On October 1st I picked Siegerrebe grapes at nearby Downriver Orchards. Last year Don had trouble with powdery mildew but used a variety of organic sprays to bring in a beautiful crop, much of which is now bubbling on its way to becoming a kinda yellow wine. 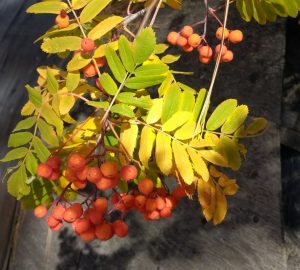 The vats were full most of the time as crop after crop went through the crusher and into primary fermentation. We were drying prunes, the last of the dried fruit; stacking firewood, making wine and eating our favorite kinda yellow corn fritter breakfasts up until October 9th. About then we started having fires in the wood stove most mornings to warm up the house. Now it’s going, most of the time with a warm yellow flame. 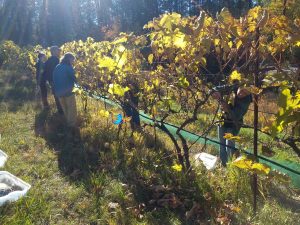 A team of friends from our Slow Food group came over on the 14th to bring in our biggest crop, Baco Noir. It was more of a red day with lots of wine, Cheryl’s homemade chili and red leaves on the oaks and ash trees. I thought Baco Noir would be the last red wine of the year but a couple days later some friends gave us their grapes which included Marquette. It’s a grape that I had heard a lot about but never seen. The color is amazing, a vivid deep magenta. There is still a little bright froth at the top of its carboy as it settles in for a couple of years of fermenting before we can taste how it turns out.

But the last grapes to come in are “whites” which really are kinda yellow. On the 21st I started harvesting the 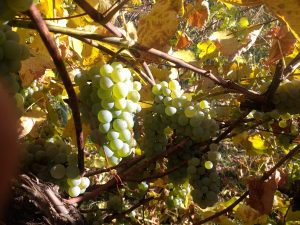 Okanagan Riesling. We have enough to sell this year from the 2016 crop and it is wonderful. In fact although red wines are perennially popular, the whites tend to have more distinct flavors. Siegerrebe caught the attention of the crowd at Barreca Vineyards wine tasting on Friday the 19th at Meyers Falls Market. The slight citrus tang of Muscat was also welcome. Our last grape wine of the season is Gewürztraminer, a spicy addition to our kinda yellow lineup. We made Himrod wine again this year to take advantage of the tangy taste of this seedless variety. Soon after it gets totally ripe, the clusters start to drop, so you have to deal with them. 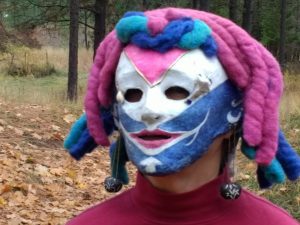 Just before the end of daylight savings time, the mornings are especially dark. We dressed up in costumes for our last Farmers Market of the year on Halloween itself. We set up the canopy in the rain by the light of a kinda yellow street lamp and ate our pumpkin pie for breakfast. It was a little sad to say goodbye to our market friends for the year. The vendors gave a gift basket to Tazi and Tamara because it was also the last day for Tazi’s Coffee Shop that has been such a boon to the market all year.

There is still some yellow going on. The Western Larch (Tamaracks) have turned bright yellow but will soon lose 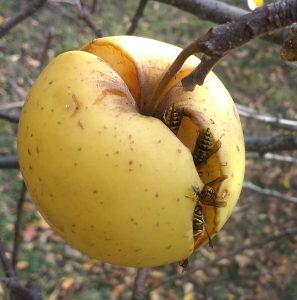 their needles. I picked Golden Delicious apples that our neighbor gave us. Some started to split and the last of the Yellow Jackets loved that. I have a new respect for them although I think one of them nailed me in the neck on the 15th. They kill destructive insects like leafhoppers and they store yeasts over the winter. And of course they are kinda yellow. 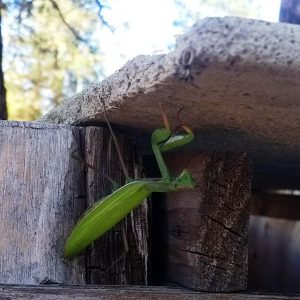 This Praying Mantis is not yellow. Sometimes they are. It’s in a faceoff with a spider.

Posted in Blogs, Grape Growing on 8 November 2018 by barrecavineyards
One Comment »

One Response to Kinda Yellow