All the leaves are brown

All the leaves are brown and the sky is gray…
(California Dreamin, the Mamas and the Papas) 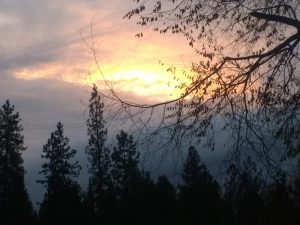 The Sky is Gray

Four days after Halloween daylight savings time ends. It gets dark around 4 PM. On the bright side there is daylight at 7 AM. What really closes in is the realization that although winter might not be officially here, for all practical purposes it already is. Get the wood in. Cover anything you don’t want wet. Bring in the crops… I’m sure they put Thanksgiving toward the end of the month because if you are ready for winter by then, it’s really something to be thankful for. 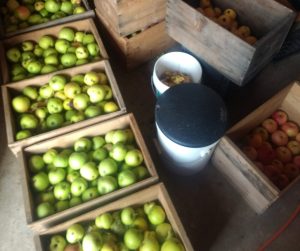 At least the cooler weather keeps fruit well. Unlike grapes, that need immediate attention, apples can wait. So days crushing apples for fresh cider, cider to freeze and cider to make wine out of were spaced out all month. I have been crushing and pressing apples on what I believe is the first apple press made at the American Village Institute in Marcus. They still make cider presses. I worked in their foundry around 1977 having already ordered a cider press, I was able to cast parts for one that was assembled on site at the end of our apprenticeship week and it has my initials cast into it. 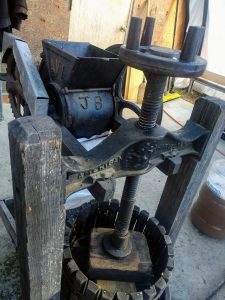 AVI = American Village Institute, JB is me, American Harvester is the style.

Now that it is 40+ years old, it cranks a little slower – that may just be me. The juice leaks out in places but mostly goes in the stainless steel bowls where it should. There are no real bearings but the 25 pound flywheel keeps the crusher turning except if you put more than one apple through it at a time. It takes 3/4 of a box of apples to fill one pressing basket and make about a gallon of juice. I crank with one hand and load apples with the other. It goes pretty easy at first but by the time the basket is full (believe me), Nordic Track has nothing on my cider press. So it is really good exercise and I am going to totally rebuild it with an electric motor and real bearings or just replace it as soon as I can.

While crushing apples I listened to Rocky, the overachiever pine squirrel, who has been dropping pine cones from 100 ft up on our huge central Ponderosa pine tree at a prodigious rate. He (or she) takes an occasional break to sit on a limb and chatter at us in between bombing runs and trips stuffing pine cones in the open ends of the old house forms that make up our shop and woodshed. He is good company but don’t walk under that pine tree. 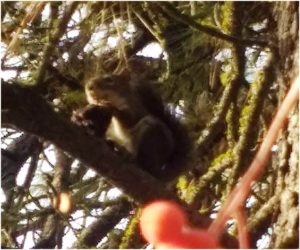 Rocky with a pinecone

The cider process is also popular with deer, who come round to eat the leftover apple pulp from the pressing. I have been trying to mix some of it in with the compost I am still spreading between the vineyard rows, but I don’t always get to that right away and the deer essentially camp out here when there is apple pulp by the compost. There’s nothing like going into your back yard at night and seeing two bright green eyes staring at your headlamp from a deer bedded down on the lawn. 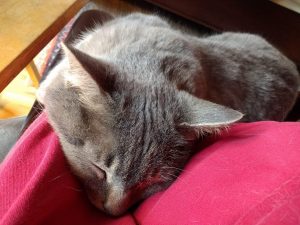 Another creature to feature this month has to be our cat, Gray-C. Cheryl started humming Christmas carols with Gray-C on her lap earlier this month and Gray-C started meowing along with her. But later a big orange tabby feral cat moved into our outbuildings and we saw the two cats sitting in a tree yowling at each other one morning. A couple nights later a cat fight broke out on the south side of the house. There were tufts of orange and gray hair left on the grass in the morning. I wish that was the end of it. But on November 27th Cheryl discovered that Gray-C had a swollen cheek. A hastily arranged visit to the vet confirmed that there was an abscess that had to be lanced after shaving off hair on one side of her face. A couple days later Gray-C brought in not one, but 2 dead mice in the evening and has not slowed down since. It’s probably her way of making up for the vet bill. 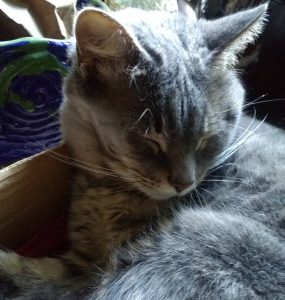 Gray-C after a close shave

We celebrated the end of the month at Thanksgiving with our daughter April and her family and friends. Snow was falling on Boulder Creek pass as we drove home but has not managed to stick here yet. Huckleberry/Apple wine is working and wafting great smells in the office/winery. New mapping and history projects are spread over the desk. Gretchen and Gray-C warm up by the wood stove in the morning. All the leaves are brown and the sky is gray, but it’s okay. 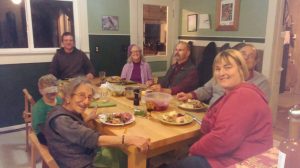