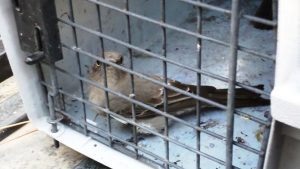 This is the time of year when I am typically at war with the birds, mostly warblers. Once they get a taste of the grapes, it is very difficult to keep them away from them. I have tried flashy objects and a plastic owl with little effect. Other vineyard owners have used scary noises like a propane cannon or recorded sounds of a robin in distress. I gave up on those things several years ago and now use bird nets. Last year, probably because of the fires, the birds were particularly damaging. Many local grape growers got none at all. Because I had most of my vines covered, I was better off although I had to export several birds a day that I caught in the nets. I would typically wet them down with a hose to slow them down enough to catch them and put them in a cat carrier that I use for safe transportation.

This year I resolved to get on it early and completely. I still have a lot of work to do but thought I would pass on some information while there is still time to act. At first I had stiff nets made with sold plastic cross-hatching. They were hard to deploy and were never the right size. Then I went to a kind of knitted plastic net with hexagonal holes. They still were not usually a handy size for rows and the holes were big enough that many birds would get stuck in them and die. 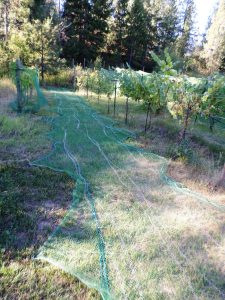 For the past few years I have replaced all of those with row netting from Plantra. Flexnet is 17 ft across and comes in 500 foot pieces. (I just bought 500 ft of it and do not need that much, so if you want less than that, I can share.) The kind I like has white lines running the length of the net that show where the top and bottom is when you drape it over a row. It tends to stetch out longer than the design length and make the width too small to reach the ground on both sides. So to get it to full width I pin it to the ground near one side of the row and pull it out to the other. When folded in half and pulled the width of the row, it is 8.5 ft wide. When I cut it after laying out the net down the whole row, I know that it will be wide enough and long enough. 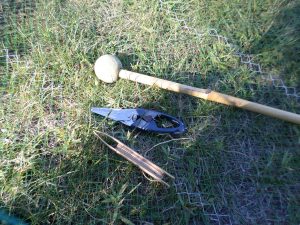 Tools of the trade

Birds often get in and out of the ends of the rows. I had been pinning the net to fence staples on the end poles of each row. But that was seldom good enough to stop an excaping bird. This year I used an H-style net needle, 3/4 inch by 7 inch, to stich up the ends of each row. My son-in-law Joe Brock brought it down after fishing in Homer Alaska. It fits through the 3/4 inch holes in the net and holds over 20 feet of twine. I found some 20 lb. Beadsmith Hemp Cord that does a great job. It holds a knot well, something that plastic seine twine is not as good at. With the ends sown shut, I can pull the net over the end of the row like a hoodie and take it off again to pick. 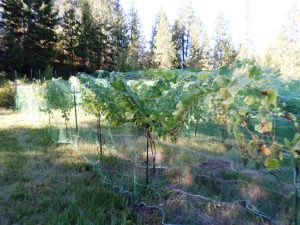 Net Installed and pinned down

Until this year I had been holding the net to the ground with whatever I could get my hands on, rocks, lumber, poles, firewood. This year I bought some “ground staples” from Plantra. They work well and are much easier to deploy and pick up again. 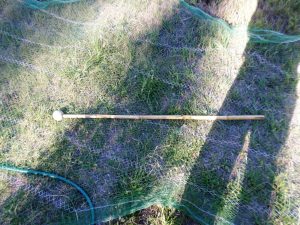 One more hint, several years ago, my wife Cheryl, came up with the idea of putting a tennis ball on the end of a bamboo pole to lift the nets over the rows, distribute them and take them down. It works incredibly well! I have a short 4 foot pole and a longer 8 foot one. The tennis balls are knappy enough to catch the net but smooth enough not to get hung up in it. 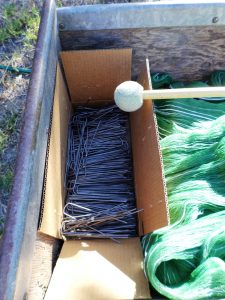 When grape vine tendrils cling to a wire, especially after they have been cut and dry there, they tend to snag the nets. Cut those off when you are pruning to avoid that problem. A pair of prunning shears works better than a knife on that job.

I don’t pretend to know everything about bird nets. Every year I find a better way. Actually this year the wasps and yellow jackets look to be the big problem. More about them later. But if you want grapes, get some nets up. You’ll be glad you did.