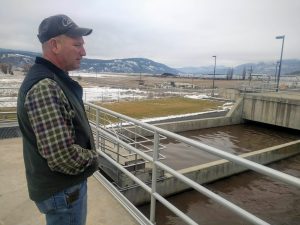 After touring the Colville Wastewater Treatment Plant I met some old friends while shopping. They asked how it was going and when I told them I had just toured the sewage plant, they gave me that “Oh, oh, Joe’s gone off the deep end” look and quickly slipped away. Generally we are not comfortable talking about poop. But I have become interested in the billions of microbes in a teaspoon of fertile soil and many of those same microbes in our guts. I was thinking that there should be some boost to soil fertility from properly processed poop. So I asked Waste Treatment Plant Operator, Scott Thomas, for a tour, which he made time for on the spur of the moment.

The plant can treat almost 5 million gallons of wastewater a day and has a bypass system if it goes beyond that. There is a chart of 36 common activated sludge microorganisms that staff in the plant track as a succession of organisms digest each other into “higher” forms with “water bears” being one of the last stages – and one of my favorites. Tardigrades, AKA water bears, can enter a state of cryptobiosis, a dried up little spot to my way of thinking, that can survive in outer space. Actually they prefer ferns and lichens but there are plenty of them at the far end of the sewage plant. 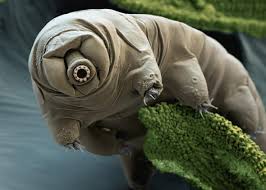 The plant itself is like a giant digestive system. Everything coming in is ground down by the “muffin monster” in the headwaters building. It’s a little like chewing your food, but in this case feminine hygiene products and other junk need to be prevented from clogging the system. The bigger chunks are filtered out in the preliminary treatment plant along with heavy grit and packaged in long plastic tubes that are sent to the dump, AKA sanitary landfill. From there the real action begins in the Selector Tanks. Anaerobic (airless) digestion is started by recycling organisms into these tanks that proliferate in the raw sewage over an average holding time of 12-24 hours. From there the wastewater is fed into the Biologic Digester which is like an artificial river with aerators that introduce air into the water and propagate the next level of microbiotics. This two-stage digestion eliminates a lot of troublesome microbes that would survive anaerobic digestion.

With microbes in the final stages of development at the plant, the water is clarified and irradiated with powerful ultraviolet lights that make the microbes incapable of reproducing and then aerated to make sure it has enough dissolved oxygen before it is sent to the Colville river. Every 5 years the water is tested for just under 200 pollutants. The sludge is sent to a holding lagoon where is kept for years. The current cycle is from 2006 to 2022. Eventually the dried sludge needs to be tested by the Department of Ecology before it can be spread as fertilizer on fields. At that point it will be classified as either Class A or Class B bio-solid.

These plants need to keep their microorganisms alive and to eliminate metals: arsenic, cadmium, copper, lead, mercury, molybdenum, nickel, selenium, and zinc. Colville does not test for other metals or any of the 352 pollutants categorized as hazardous in federal programs other than the EPA’s bio-solid’s program . Simply put, that is not their job. These are good people doing an honest day’s work but the system conforms to laws that are not keeping up with modern society. No two wastewater treatment plants are alike or deal with the same input. 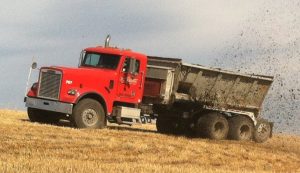 To get the lowdown on the opposition to the application of sewage sludge on agricultural land I talked with Chrys Ostrander who along with other residents of Mill Canyon, just north of Davenport, Washington, successfully stopped application of sewage sludge in fields above the canyon which is also home to Tolstoy Farm, an organic grower. Their battle was with Fire Mountain Farms of Onalaska, WA, a company with a checkered reputation that offers to apply sewage sludge on farms at no cost to the farmer (the company is paid by sewage treatment plants to take the sludge away). Despite the folksy name, Fire Mountain is rich, powerful and has very good lawyers. Several years ago neighbors of Fire Mountain’s sludge processing facility experienced an epidemic of miscarriages in their livestock. Fire Mountain was found to be illegally mixing industrial waste with sewage sludge and was shut down for a time by the Department of Ecology. A new battle is coming in Yelm with Fire Mountain waste products, mostly class B sludge, near the Nisqually River. (See http://preservethecommons.org/biosolids-near-yelm.html) Chrys considers sewage sludge to be like nuclear waste. There is no safe amount for farmland or the ecosystem.

In the opposite corner is Chris Eckhart whose family farms 1500 acres near Deer Park. They have had biosolids applied to their property. Recently they have used sludge from the City of Spokane that scans for 250 chemicals. Chris visited their plant and is glad that now his organic matter in the soil is now up to 3%, a worthwhile number.  They also tried solids from the Deer Park wastewater plant. That did not turn out so well and was the last from that source. 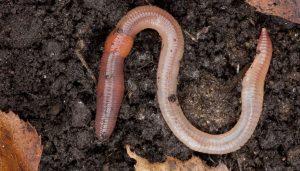 Part of the problems with sludge are POPs and I don’t mean soda pops – though I don’t think much of those either. POPs are “persistent organic pollutants”. Basically these are things that bioconcentrate in living organisms. One of the best key tests is on phylum Annelida, earthworms. Sewage sludge can be bad for earthworms. An article about land treated with sewage sludge in the journal Environmental Science and Technology, issue 42, states “The anthropogenic (involving the impact of humans on nature) waste indicators, AWIs, detected in earthworm tissue from the three field sites included pharmaceuticals, synthetic fragrances, detergent metabolites, polycyclic aromatic hydrocarbons (PAHs), biogenic sterols, disinfectants, and pesticides, reflecting a wide range of physicochemical properties.”

So let’s break that down a little. Pharmaceuticals can include Warfarin, a blood thinner, Testosterone, a hormone, opiates, steroids and antibacterials. These in turn have caused antibiotic-resistant bacteria to develop in sludge-treated ground, half of which are resistant to more than one antibacterial drug. Detergent metabolites include Triclosan and Triclocarbon found in those antibacterial sprays and wipes that have become so widely advertised. They keep on killing long after leaving your kitchen. PAHs, chemicals from petroleum and coal, have been linked to skin, lung, bladder, liver, and stomach cancers in well-established animal model studies. Biogenic sterols are a reliable marker of human sewage contamination. Disinfectants and pesticides are designed to kill and will ultimately kill these earthworms. But they will still not leave the soil where they will concentrate in organisms including food plants or water again.

There are enough studies about people downwind or downstream from sewage sludge having a long list of health issues to put wind and water at the top of the list of things to consider if sewage sludge is coming to a neighborhood near you. Are biosolids totally bad? Ask the worms.

Posted in Blogs, Regenerative Agriculture on 14 February 2019 by barrecavineyards
6 Comments »