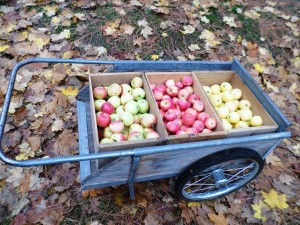 Apples selected for the cellar.

November is an odd month to be writing a blog. It is hard-pressed by December for any airtime. Even before Thanksgiving, the Christmas media barrage was in full swing. As if that was not enough, Christmas weather started early and is still going. Last year it was the “Polar Vortex”, this year the news called this cold snap the “Polar Plunge”. I’m calling it the “Polar Roller Coast to Coast-er”. It started off slow, the first day we had a warming fire going all day was November 4th. The next day was cold but nice enough to cut up half a goat (that we got from Quillisascut Farm School) outside on a table under the big pine tree. The next week was the big plunge staying below 20 degrees and down to 17. At least we didn’t get 7 feet of snow like Buffalo, New York. 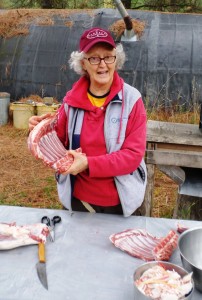 While we were still bringing in food from the garden and orchard, I started transforming this office building into a Tasting Room for Barreca Vineyards. The first step was to clear out an area on the west wall that had not been purged in years. Next I had to move all the carboys of wine in the building out of harm’s way. Then the real chore began: dismantling the loft which had held a bed for guests the last 17 years. All of the lumber from the loft was used to 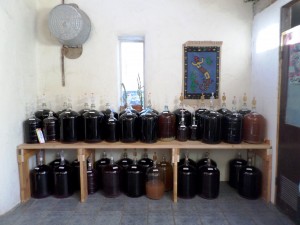 make a bench for 43 carboys of working wine, some working since 2012.

The apple trees didn’t have a chance to fully ripen or even get a water core when the Polar Roller Coaster coasted in. Luckily I had picked 600 lbs off our big tree and the neighbor’s trees before the big freeze hit. The trees still have their leaves stuck on the branches but the apples stayed above freezing in our storage shed. Unluckily, I had missed the big neighborhood apple pressing when we went to Barreca Family Thanksween in October. I didn’t look forward to crushing all of those apples by hand. I did look forward to putting some apple cider in the freezer and turning the rest of the juice into apple wine. A neighbor, Joel Green, came to the rescue by loaning us an apple press that had been converted to use an electric motor. It took me a week pressing apples off and on to get through them all. 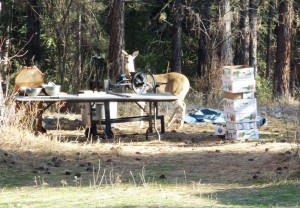 The left over apple pulp was very popular with the local deer. Too popular really. I did manage to take most of it to a local sheep ranch where sheep and horses munched it down. The deer did get their fair share. One day I had 4 of them lined up for nibbles while I was crushing.

While the pulp might motivate the deer, figuring out new wines and ways to make them using apples motivates me. A lot of wild and domestic fruit and berries go to waste here that would make tasty wine if they were only sweet and juicy like grapes. For several years I have been cooking down apple juice on our wood heat stove to bring it’s sugar up to the same sweetness as wine grapes. This Caramel Apple wine has been popular with many people, but is hard to do at any scale, even though there are a lot of apples going to waste. One day last month while defrosting a jug of cider from the freezer, I noticed that the juice that remained liquid was much sweeter than when first pressed. The water molecules freeze to each other in thin sheets and leave the sugar and some juice unfrozen. With some experimenting, I have learned ways to use the very cold nights that came back with a vengeance at the end of the month to freeze-sweeten the apple juice. But with no fruits or berries to combine with the sweet apple juice I’ll have to put this line of exploration on ice until next year.

Cheryl and I went to Spokane on the 21st to celebrate her 65th birthday. We did a lot of shopping and ate out at Milfords Fish House. (I think we’ll stick to Anthony’s for seafood from now on.) We headed home in pouring rain and drove in it for the next 80 miles. The big birthday surprise was when we got to Kettle Falls and down to our place, the rain had turned to snow as the Polar Roller took another dive down home. 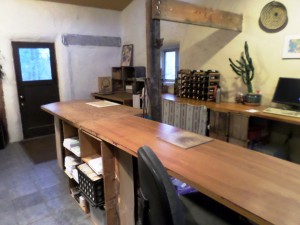 The next day I started a shop project to strengthen the tasting “bar” that is now the centerpiece of the office. First I had to clean out the shop. (Does this sound familiar?) That included replacing the decade-old vinyl window with one that is “so clean it seems to disappear”. Now I can heat the shop without competing against the wind. 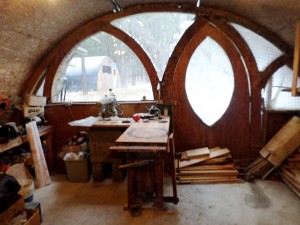 Daughter April and grandson James visited on the 28th. We hiked up the hill and found a Christmas tree to take home. So in the end, Christmas and all the doings of December took control again. That means among other things, that I’ll need to condense all of these blogs into a Christmas Newsletter. The snow 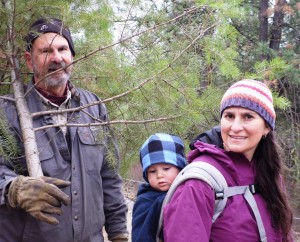 Bringing in the tree

is back but rain is predicted. The Polar Roller climbs to the top for another run… Cheryl says: “Hopefully we’ll have a real white Christmas that brightens the scenery considerably and lightens the mood as well.”