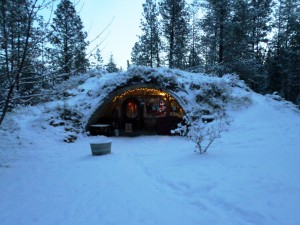 It’s the end of/beginning of the year which calls for some introspection, retrospection and indigestion. We are finally getting the snow that eluded us up till now. But we knew it was coming and should be prepared. Personally, I bought more than the usual amount of firewood. It is very dry but with a lot more knots than usual. So I also bought a “splitting axe”. It is a cross between a regular axe and a splitting maul. It does wonders on this wood. Pieces fly away from each other in both directions. The splitting axe is one of many upgrades for the season. Another winter-related upgrade was putting on the winter tires that came with this 1998 Toyota Rav 4. They came with studs, which we figured would be bad for the pavement and bad for mileage. It costs $9 each to put studs into new tires and $25 each to take them out. So I spent a little time each day taking out the studs with an old screwdriver. Which brought home the fact that every upgrade comes with a price. Other winter upgrades included new vinyl storm windows and cleaning the chimney.

The biggest upgrades for the month had to do with computing. Scott Hirsch, owner of our local Internet server farm, Secure Webs, is always upgrading to the fastest computers with solid state drives etc. So he has spare parts that are better than my regular parts. With a little discussion and a few bottles of wine, I bartered a trade for a computer upgrade on my main mapping computer. I brought it in for the conversion and you would have thought I was trying to trade in a Model T for a Tesla. It was a scramble to even find something that could read my old IDE drives. I had to buy a copy of Windows 7 (I don’t consider Windows 8 an upgrade) and Scott scrubbed a couple of big 500 gigabyte SCSI drives for the new machine before installing Windows 7. Thankfully he has very fast Internet because after installation, Windows 7 needed 167 updates, which even at high speed took hours. When I got the machine home, it ran fine, but would not talk to my network. Researching the problem, Scott found out that one of the 167 Windows 7 updates was screwing up communication. We managed to eliminate that one and then everything worked great. 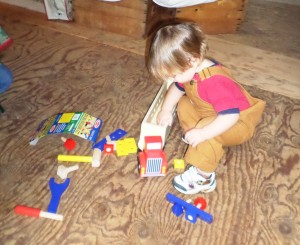 James got a truck/tool box for Christmas

Our Christmas celebration was better than ever, but not from an upgrade – unless you consider my newest grandson, James Anthony Houston, an upgrade. He loved the combination truck and wooden tool box that Cheryl found for him. Being able to exchange gifts under the tree with my daughter April and her family was great. Then we all went to Mary Selecky’s house for dinner, stories and gift exchange with many other friends. James found his niche handing out presents at the gift exchange. He doesn’t talk much but understood who to give presents to. It was a “white elephant” gift exchange, where people took numbers and then could take a present from someone who had already opened one or chose one out of the pile. What James didn’t exactly understand was that you are not supposed to walk on the presents that have not been opened yet. Luckily nothing bad happened and we all had good fun. 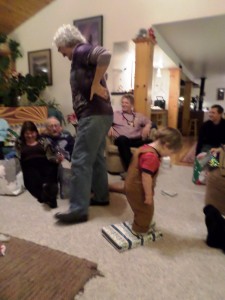 I spent other parts of the month getting ready for Christmas (with minor lighting upgrades). We filled our freezer with 2 locally grown lambs and ham. I worked over the long table in the tasting room so it was solid enough to hold up teetering tasters. And Cheryl gave me new strings for my bass, so now it holds notes much longer. All of these had their associated costs but nothing unexpected. Then I decided to bite the bullet and upgrade our Internet connection. A little testing showed that our neighbor’s Hugesnet satellite connection was over 10 times faster than our Verizon wireless. I didn’t expect that since we had switched to Verizon years ago because it was faster than Wild Blue satellite.

It turned out that the new Hugesnet dish could be mounted where our old Wild Blue dish was still fastened to the corner of my office roof. The installer arrived here after dark the day before New Year’s eve. It was 20 degrees outside with a wind chill down to 10) but he didn’t seem to mind and after about an hour, Hugesnet was plugged into my router and I was getting fast Internet. It was only after he left that I discovered that the other two computers being serviced by the router no longer had any Internet. After an hour or so trying to fix that myself, I discovered from a Google search that Hugesnet controlled how many computers could use their signal. After a tedious call to their support line, they opened up lines to the rest of my computers and I could sleep. Skype and Netflix seemed to be right around the corner. 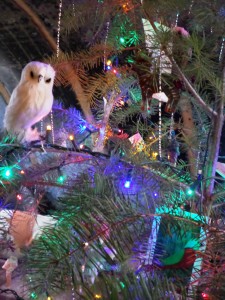 One of many owl ornaments looks over the Christmas Tree

The next morning, I discovered that my router no longer talked to my printer. Since I sometimes print 3000 pages a day, this was a big problem. It was caused by conflicting IP addresses (numbers that identify each device on a network). Hugesnet took over the address that was previously used by my router. More time on the support line gave a new address to the router but did not let it see the printer. On New Year’s day I finally got the printer into the network again and sat down in front of the TV to watch the Oregon Ducks’ “quack attack” completely befuddle Florida State in the Rose Bowl game. Then I checked the speed of our new Internet service on Cheryl’s computer. No faster than before. I’m afraid more “upgrades” are in the works, but not until I recover from the last ones.

More pictures are in this CHRISTMAS ALBUM: