So, three months without a blog… I have not really gone into hiding even if it seems like that. Just as August got under way, I was installing a dead bolt on the 6 inch thick cellar door and sprung something loose in my back. My trusty chiropractor got it working again after a couple tries but it is still not exactly right. That kindof set the tone for the last 3 months: lots to do and no time for extras. Of course there were lots of extras. Sure I needed to finish the last third of the trails contract I landed three years ago and had been putting off all year. I was cranking out trail maps and driving into the mountains to take pictures. I still have a lot of work to do to make the office/tasting room presentable even though it has technically opened at the end of July. I got the 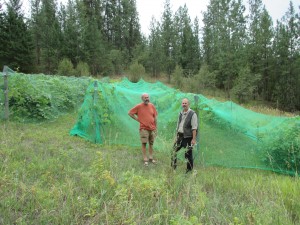 John and Joe Barreca with bird netting over the vineyard

bird nets up just as the birds noticed that the red grapes were turning blue. I kept looking for huckleberries while visiting trails. Forest fires were smoking up the air almost every day…

And then the visitors started coming. April and her family are now close by 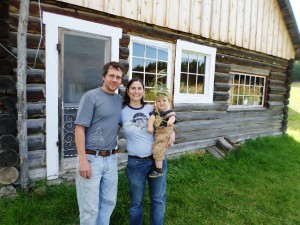 Tony, April and James on the side of their 100+ year old cabin

and have been over several times. Bina did a marathon road trip from California with her two small kids in her 1980 Mercedes. Her husband Joe Brock describes it as “a 1980 with the non-turbo, naturally aspirated 2.4 liter diesel. I think it is one of the best cars ever made. It comes from a very special time in the history of Mercedes, when they were somehow letting the engineers make all of the decisions about how to build cars, rather than the accountants. The car is literally designed to last as long as possible and to be a pleasure to wrench on the whole time. The original owner was a well-known professor at UC 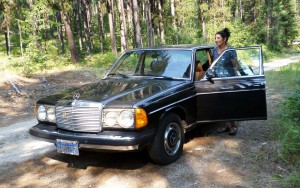 Bina with The 1980 Mercedes

Berkeley named Nello Pace. I bought the car from a guy that got it from his widow. Nello picked the car up new at the factory in Stuttgart, and then had it shipped over to California. There is a meticulous maintenance record for the car over its entire life, and the mechanic was Nello’s next door neighbor, Nick.” It was a very impressive car. It looked to me like it should have small flags over each fender and a police escort. Bina drove up the San Poil River Valley at night just as the Devil’s Elbow Fire broke out and somehow managed to slip through before the road was closed. The daytime temperatures were over 100 degrees. Bina and her kids spent a lot 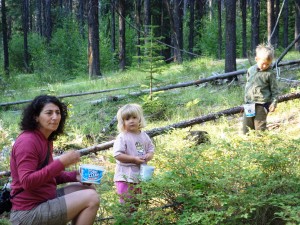 of time at nearby Bradbury Beach. Many old friends visited them there. Luckily I finally did find a great huckleberry patch and we`went up there to pick with Bina and the grand-kids, Ovid and Nala.  A photo album of visitors.

Meanwhile, warblers, a protected yellow and gray songbird, were managing to get stuck in our older bird netting. I tried to get to them in time and deport them elsewhere in a re-purposed cat carrier. But many died before I got to them or after our cat did. I felt a heavy weight for losing the dead ones and intend to replace that kind of netting by next year.

I also bought an old platform scale with a sliding weight. I thought I could easily find additional weights for it but that didn’t work out. It is a very precise scale with increments of 100th of a pound on the sliding part. Probably not the best choice for measuring the grape harvest… So I spent some time making my own set of weights by melting 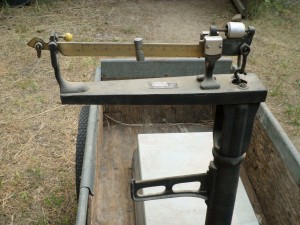 down lead bullet tips that I had collected years ago. I like the platform scale because it doesn’t just push back against a weight, it finds a balance between the load and the measure. Maybe it’s just a Libra thing. My birthday is near the equinox, the evenly balanced time of year. I do notice however that it is the fastest changing time of year. By the time I am writing this, it is much darker and colder, no 100 degree days now, although remarkably we have not had a hard frost yet. Tonight daylight savings time reverts back to something close to real solar time. So a balance is hard to hold on to.   Harvest Photo Album.

By the end of August, we had finally visited our daughter April’s new house at the end of a 7 mile gravel road that comes out right on the highway right across from the Curlew school where she is the science teacher. Three days later, my brother John and our 92-year-old father arrived for a visit. Dad had not been here in many years and we had some adventures. We toured my vineyard and another new vineyard down the road. The owner let Dad drive an ATV since he has trouble walking long distances. We took him over to see April’s new home and visit their landlord, who is an old friend of mine. We toured her school. My sister Rosalie 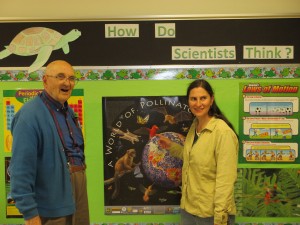 Dad and April in her science classroom

came to pick Dad up and we ate dinner at our favorite restaurant cashing in on some credit I had for planting grapes there. Things settled back down after they left for Seattle and I picked up the burdens of trying to get my trail maps done and also get the crops in.

I also got to ride an ATV for the first time myself a few days later with a rockhound friend out a rugged trail to the Talisman Mine. The mine tunnels into some very solid rock on a cliff that drops off 2000 feet to the valley floor below. The view is spectacular over the border into a lake in Canada. A tram once carried ore down the cliff face to a mill next to the railroad line. The ATVs made it possible to be home to cook dinner and get back to drying fruit and making maps. Our new Cabela’s Food Dehydrator can handle more fruit than I can. By the end of the season, we had 13 gallons of nectarines, plums, apples, pears, raisins and apricots. Tomatoes are still drying. 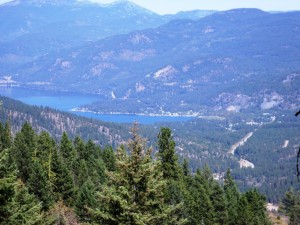 Christina Lake as seen from the Talisman Mine.

Business was good this year. We prepared for winter by buying firewood and a new kitchen range. The range made a nice 19th wedding anniversary present for both of us and as designated pie maker I cooked a pear pie in it for my 67th birthday, three days later. The day after that we started picking this year’s harvest of grapes. It turned out to be the biggest and best yet. Luckily just before that, I got the trail mapping project online and was able to devote most of October to making wine. So the wieght of one project was off and another was on. My new scale got a lot of action in October. What didn’t get much action was being paid for the trail work by the government – a shift from weight to wait.

In a related lucky break, we were able to buy an 80 gallon stainless steel vat that had been used to process honey by a friend of ours. So crushing and fermenting hundreds of pounds of grapes at a time became a regular routine. It took a lot of help from our friends. I felt almost like Tom Sawyer convincing Huck Finn that whitewashing a fence is fun. Actually picking grapes with a friend is fun. And crushing them all in a short time at the end of the day is satisfying. Cleaning up after dark does tend to make for a long day though. We picked nearly a ton of grapes but we will have to wait 2 to 3 years to taste the wine. 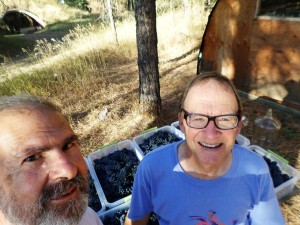 With the wine in carboys bubbling away on my office floor, cases of wine for my family, appetizers for dinner, songbooks and an electric bass packed in the Rav4, we headed out to Friday Harbor for the annual Barreca Thanksween (explanation to follow) with a lot to be thankful for. We left at 5:45 AM and got to the 2:40 ferry with only 10 minutes to spare. This event is now so big that the family rented the Grange Hall to fit everyone in. I picked mushrooms on a walk arranged by my sister Rosalie and we bought some more Chanterelles.  Thanksween photos 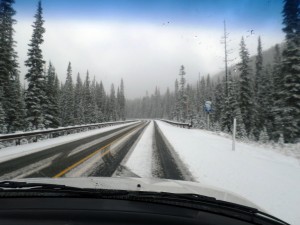 The snow on the North Cascades Highway on the way back.

at a roadside stand on the way back. Snow had begun falling on Washington Pass (the reason that our family Thanksgiving has been moved up as a concession to those of us on the east side of the mountains to before Halloween – to make travel safer) and we could hardly wait get back home.  Fall Travel Photos