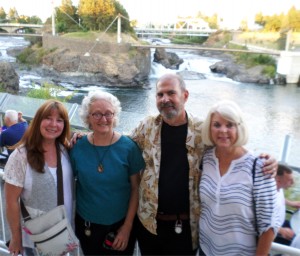 This was a fun visit with Cheryl’s Sister in Law Joyce and her niece, Cindy.

Winter has set in with definitive cold and frozen ground. Temperatures are in the 20s and the snow now predicted in a couple days may stay for months. But I am just now getting around to writing about some good times we had with family this year. It’s not like we don’t see a lot of people all year, with tastings at the winery and days at the Farmers’s Market, we see a lot of the public and our neighbors. But family stays and plays. We watch them grow up and grow old. There’s nothing like people you have known all your life or all of their lives to focus on the whole experience of living. Besides they often come from a long distance just to be with you.

Such was the case with Joyce Pulver, Cheryl’s sister-in-law, who came through Spokane on a bus tour with her niece, Cindy on July 17th. We got together for a little driving tour of Spokane and then ate dinner at Anthony’s, a restaurant with great seafood overlooking Spokane Falls. We last saw her in Marietta, Georgia years ago. She still looks great and is a joy to be around. Too bad she doesn’t live closer. (Almost month earlier, we attended and played music at family gathering of Cheryl’s cousins, Kathy and Pat and Loose Gravel band at Pat and Alan’s house in Chewelah. But we didn’t take pictures.) 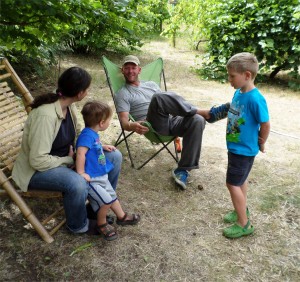 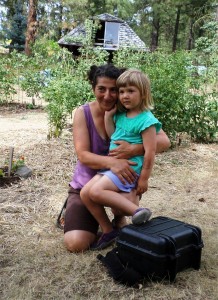 A couple days later we got our first visit from a young bear who was interested in our cherry tree. We chased it off, but it goes to show how long ago that was. Only a week later, my daughter Bina and her whole family drove up from Alameda in Joe’s big Dodge Power Wagon. It was great to see the whole family together. Joe Brock doesn’t make it up this way often since he is mostly busy building kite boats and testing them in open water. Their kids, Ovid and Nala are a lot of fun to be around. I made a big goat-leg stew for us one night and they got to catch up with old friends before heading west to see more family near Mt Rainier. 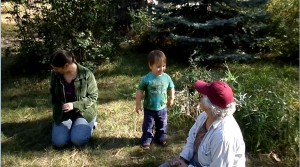 This picture links to the “Poopy Butt” video.

The weather kept getting hotter. I explored an old mining area with daughter April and son James near her home in Curlew just before the big fires broke out. All of August was a smoky fire season. April and James made it back over here during the grape harvest. We sat around the garden and vineyard talking and sampling grapes. Cheryl (C-ma) got into a conversation with young James in which he found the term “poopy butt” to be tremendously funny. I have a video clip from that that I plan to blackmail him with some day. You can see it by clicking on the picture. 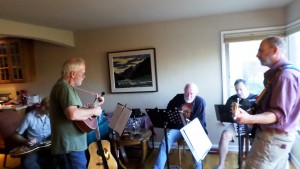 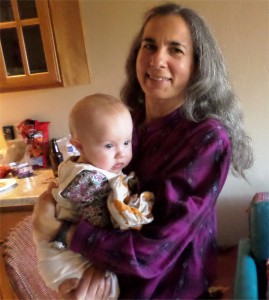 Sometimes relatives come to you, sometimes you go to them, as we did for the annual Barreca Thanksween gathering. It’s grown too big for most of our houses. This year my brother Jeff reserved space at Angelo’s Restaurant in Burien. Family members were spread out overnight in houses and in our case, a bed and breakfast, all over Seattle. Most of us got together early in the day to play music (or listen to it) together at my brother Mark and his wife Nancy’s place in West Seattle. Cheryl hosted an impromptu wine tasting while I played bass. The star of the event was newly born Loretta, daughter of our brother-in-law Bill’s son, Mathew, and his wife Liza. Unfortunately April, Tony and James Houston could not join us. 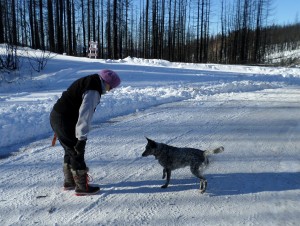 Cheryl playing with our dog, Gretchen. Note the burnt trees in back and some cut down on the right.

The best Thanksgiving however was the real Thanksgiving this last Thursday. Daughter Bina and grandaughter Nala caught a plane from Alameda and stayed at April’s house near Curlew. April cooked a big organic Turkey that has been in our freezer for about a year. Cheryl made a great 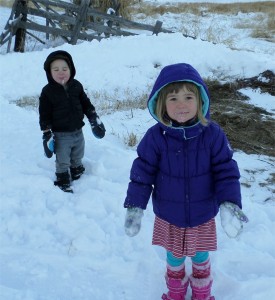 squash and persimmon pie. I broke out some wines that were truly reserved… There was lots of fresh, organic home-cooked food in April’s 100+ year old log cabin. We played with grandkids indoors and out in the snow. Even our dog came along despite a lot of whining on her part during the trip. April, Bina and kids stopped by on their way to Spokane and the flight back to California. There was a lot to give thanks for this year and we are especially thankful for visits with family. 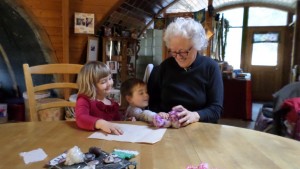 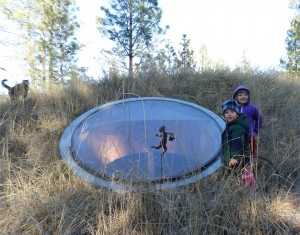 James and Nala run up on the roof while our cat, Gray-C looks on.