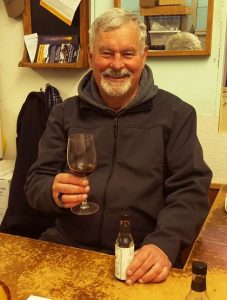 It’s nice to have some confirmation that your wines are good from a wine expert. Recently I was pleased to learn that Ronald Irvine has tasted Barreca Vineyards varieties Léon Millot and Baco Noir. Before I elaborate on what he had to say let’s introduce Ron.

Prior to purchasing the Vashon Winery nearly 20 years ago, Ron was active in preserving the Pike Place Market and he started Pike & Western Wine Shop, which he operated for 15 years. (I’m pretty sure that I bought my first grape crusher there.) Ron is also the co-author with Walter Clore of the book, “The Wine Project: Washington State’s Winemaking History.” 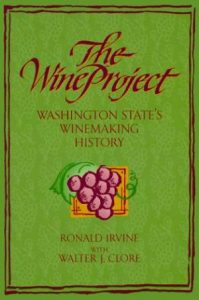 I bought that book last year. It is a good read that contains stories of visits to all of the early and major Washington wineries published in 1997. Early on there were only 5 wineries in the state. Now there are over 1500.

Mark Musick introduced the wine to Ron. Here is his description of how it went:
“We started with the Léon Millot, which Ron said was much cleaner and softer than he’d anticipated, most likely because it was harvested at 27° Brix, which is higher than any he’s seen. He said it’s phenomenal you didn’t add sugar.  Ron added that the wine didn’t have the Concorde “grapey” quality he expected. He said that, while the Léon Millot has good fruit characteristics, it’s also “leathery,” so it’s not all fruitiness. He said he thought people would like the wine because it’s so soft and easy to drink. However, he didn’t think it had the acidity to pair well with food… 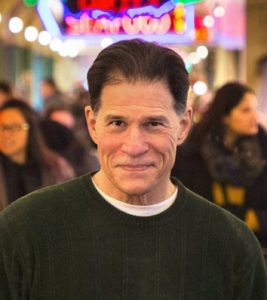 From there we turned to the Baco Noir. Ron started by saying it “smelled wonderful,” and he guessed it was because the wine quickly “opened up” due to the lack of sulfites. Because of its higher Ph, Ron said it was sharper, crisper, has more of a “bight,” and would likely pair better with food. He also said the wine would likely age longer…

The bottom line is that Ron thought both of your wines that we samples are good to very good. I’m a novice wine taster, but I had to agree. The Baco Noir in particular would have been easy to drink all afternoon!”

Ron was worried about my “Natural” wines since they do not have sulfites. I think this is a topic that needs a lot more awareness and to that end I added a page to this website, What’s in Your Wine.. I think everyone should read that article because it has a lot to do with personal health as well as the health of the soil and environment. 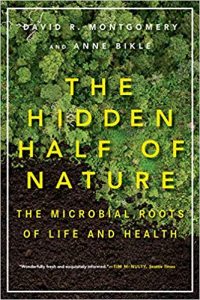 Another great book, besides The Wine Project, is David Montgomery and Anne Bikle’s The Hidden Half of Nature. This book finally takes all the lessons about how microbes work together in the soil to keep each other and plants healthy and describes in detail how those same microbial systems work inside of our guts to keep us healthy. It is readable (and pardon the pun) digestible in a way that many semi-scientific books are not. Really, you won’t think about gardening or eating the same way again after reading this book. 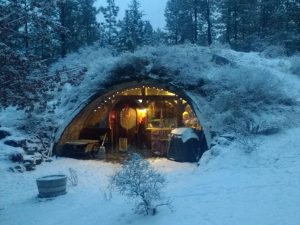 Christmas at our house.

Meanwhile besides Christmas, New Years etc. the weather has been mild and given me a chance to make a lot more biochar. Thanks to Joe Petrucelli, owner of Meyers Falls Market, I now have an old apple bin to store the stuff in and some new techniques for making it. You can expect a lot more on that topic in months to come.