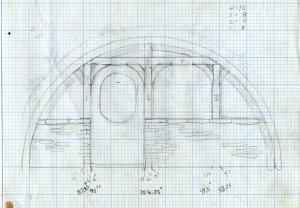 Last week my cousin, Suzy Giles, prompted me for more information about our house.  I scanned 55 pictures from our house album to get this started.  Now that I am started, I realize that this story could be a whole book.  I don’t have time to write a book and you probably don’t have time to read one in one sitting.  So this may take several blogs.

We started building our house 25 years ago. I wish I could say that it is finished, but… even the album we have been keeping is not up to date.  Since it started my kids have grown and have their own kids, the Internet and Windows took over the digital world.  There were no cell phones etc. etc.  So the plans I could find in my files were drawn on graph paper.  Before that I had a bag full of corks that I had cut in half lengthwise and several other ways.  I would piece these together to see different house configurations.  The one I ended up with was comparatively simple, except for the dome.  But more on that later. 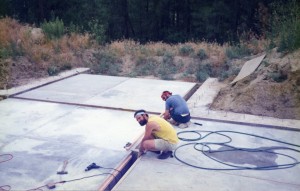 Before I moved to Stevens County, I worked in an alternative energy resource center funded by a grant in the Carter administration.  We did workshops on building greenhouses, determined the best spot for solar exposure for people, installed solar arrays and such.  I guy I met there, CR Conn, a “retired” cement plant owner was excited about the potential for concrete arch construction.  He had some engineers at Washington State University do some tests.  They showed that a circular arch is 10 times stronger to a compressive load than a flat wall.  A round structure is 100 times stronger.  The WSU lab had a ton (2000 lb.) of weight resting on four egg shells.  CR’s idea was to mass produce concrete arches that could be pieced together quickly to make buildings.  The idea also solved another issue with underground buildings, they needed to shed water, so flat roofs would not work well for holding up dirt or holding out water.  I liked CR’s ideas so when I moved to Stevens County, Washington in 1984, I went looking for a place to build a house out of concrete arches.

I found one that has well-drained sandy soil.  I knew that the house would try to settle and either had to be on solid rock or something evenly soft on all sides.  All the weight of the house rests on the outside edges of the foundation.  With over a million pounds of dirt plus about 200,000 pounds of concrete and steel, the footings were expected to sink an inch or more after the house was buried.  So the concrete pads for the floor were designed to “float” separated from the footings by utility gutters for the power, water, sewer, telephone, TV etc.  The picture shows my brother John and I working on them.  Having the pads done first was not ideal since they dry rapidly in full sun, but I needed a flat solid place to work since the next phase was to build forms that would in turn be used to build forms to hold the concrete. 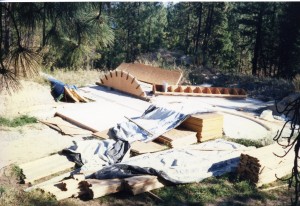 I had done some testing by building a root cellar using arch construction, so I knew that I wanted to have arches that were 18 feet across and up to 24 feet long.  In the picture you can see the stack of plywood and pressboard that I needed and the form with ribs for bending the wall panels toward the far side of the floor.  One of the panels is lying on edge behind the panel form.  In front of the panel to the left is a form I used to clamp several layers of 1×4 pine boards that were glued together to make ribs to hold up the wall panels.  The panels themselves were made with 2x4s and insulation between plywood on the outside and pressboard on the inside.  I knew that it would take several years to build the house and wanted to be able to use the space inside before it was complete.  Having insulated wall panels made that possible.  Now that they have all been removed, I used them to make outbuildings around the place for a woodshed, a shop and some storage. 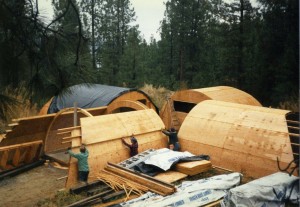 It all came together in the fall of 1990.  I had a couple of friends help me put up three of the arches in just one afternoon.  The ends of the walls were tapered to the ground so that the dirt would have some room to build up toward the roof at a slope.  (There are many of these details that I would do a little differently now, but this one basically worked.)  There were some 2×4 boards under the wall panels that were intended to be pulled out when it was time to pull the forms out in order to relieve the pressure on the keystone formation of the wall panels.  It was a huge relief to see the house take shape so suddenly after a summer of building the pieces.  In the back right you can see the window on a room that is already closed in.  That arch was to become our bedroom for many years.  Cheryl and I had moved out of the trailer where we cooked and my girls, Bina and April slept.  During this phase, we slept in a tree house from which this picture was taken. 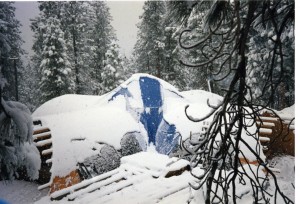 It was getting to be late in the year and I wanted to get a cover over the middle of the house.  I came up with a plan to use PVC pipe bent to make a curved surface that I covered with blue plastic tarps.  This worked pretty well for rain, but then one day we got a foot of wet snow that stuck to the tarps.  The PVC pipes were just not strong enough for that and the whole thing caved in so that the tarps were now funneling the snow into the middle of the house.  But they did not break.  I was able to put a 55 gallon barrel in the center under the tarp to hold the weight of the snow above the floor without the tarps ripping and dumping the whole mess inside.  With the barrel in place, I had my daughter Bina go to the corner between these two arches.  I got inside under the tarp and had her walk over the tarp on my back as I shuffled over to the barrel.  Once she was on the barrel, I gave her a snow shovel and she was able to shovel the snow out to the corner between the arches where I moved it away from the house.  After that I built a strong set of trusses out of wood with plywood sheathing that 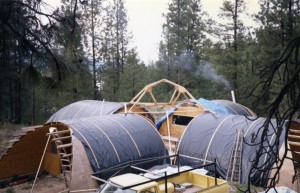 is still holding up well as the roof of our garden shed.

In this picture you can see the smoke rising from the bedroom portion of the house.  The other rooms were a large open space where I constructed another set of forms to glue and peg together the curved laminated beams that would form a dome between the four crossvault arches.   I could try to explain how that was going to work, but pictures will work better for that. Not much outside construction was going to be done during that first winter and not much more house construction is going to be shown in this month’s blog.  It will be another 4 years before we can move into the house shown at this stage, but at least we were not sleeping out in the tree house all winter.

One Response to Our Underground House