Springing Up and Down 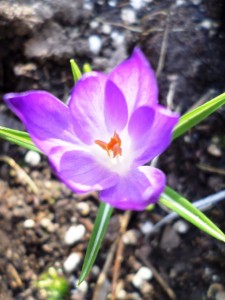 As the northern latitudes pass through the equinox, we expect things to warm up and even out. The only “even” things about this Spring would have to be averages because the highs and lows were extreme. This can be said of temperatures and to some extent events. The coldest day of the year by my records was 19 Degrees on March 4th. A week later the high was 65 Degrees. We have hit that several times more and climbed into the mid 70’s today. By most accounts it was the mildest winter and the earliest Spring ever. It looks like the California drought is headed our way. 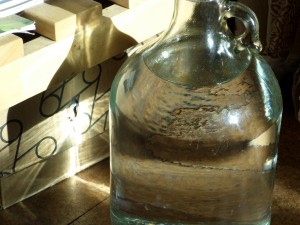 The day before that record low, the sun almost started our house on fire.  I had just (almost accidentally) fixed a problem with our Internet that had been driving me nuts for weeks by updating the router software. I was feeling great when Cheryl called from the house saying that she smelled smoke. Soon we were both walking around the house trying to figure out where the smell of burnt paper was coming from. We finally located it behind a gallon jar of water sitting on the kitchen floor. The afternoon sun was shining through the window onto the water which acted like a lens and focused the light into a small spot on a cardboard box in back of it that was smoldering. I never suspected that water could start a fire. We have kept the jug out of the sun since then. 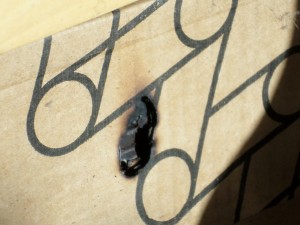 At the end of that week I was holding down a booth at our rock club’s gem and mineral show. My geologic atlases were selling well and I was eager to get to the show on time. Before I could leave in the morning we heard a lot of commotion on the state highway below our house. Cheryl went down to check it out and soon called me down to take our dog away from the traffic. An old lady, who turned out to be a neighbor we had not met, 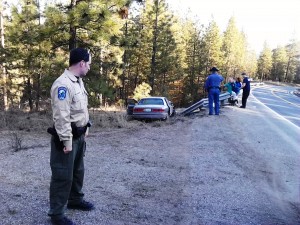 Car wreck on the highway, driver on rail.

had crashed her car through the end of a guard rail and over the bank. it was 8 o’clock in the morning and she was too drunk to drive! When the emergency services people arrived she was alright. She had a couple dogs with her that were eventually returned home. I was late for the show and the guard rail is still broken, but the month marched on.

March 9th seemed like a nice day. It was so warm that I had to drive with my window down for the first time all year. 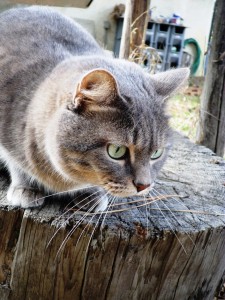 Both our cat and dog “helped” me while I was pruning grapes. But we later heard that an old friend from Rose Valley, Dave Brown, died in his sleep from a heart attack. His memorial pot luck last Saturday was well-attended and we were all asked to drink a shot of whiskey in memorium, perhaps because he drank a whole bottle every Saturday.

Two weeks after the Rock Show I had a booth at the Colville Home and Garden Show where I sold grape plants and gave two talks about grapes. I did pretty well selling grape plants but someone stole one of my geologic atlases from my booth while I was giving a presentation on grapes. So it was not such a big success. 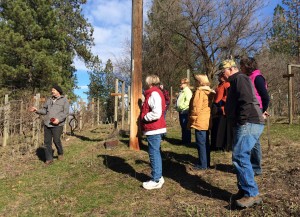 the next weekend. Everyone enjoyed it and I sold grape plants, wine and map books. 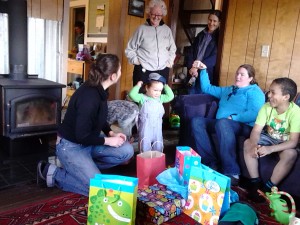 Jame tries on a new hat.

Selecky’s Easter party. There were more adults than children, more food than we could eat and more activities than we could stay for. It was an over-the-top birthday party and James loved it and we did too.

Now, April is half over. The pruning is done. My taxes are paid. Some flowers and trees are blooming. Grape starts cover much of my office floor. (They love the sub-floor heating.) Mapping contracts and wine tastings are stacking up. Today was the hottest day of the year and I got our new BBQ installed. Don’t expect to see 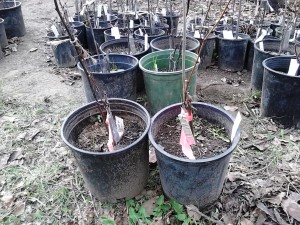 another blog for a month or more. But if you want some wine grape plants, give me a call. I am ready to practically give them away. 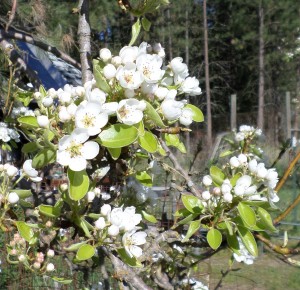