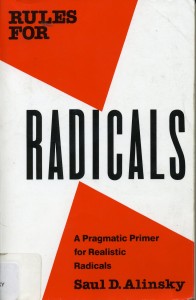 On February 18th I received an email from my uncle about Saul Alinsky’s book. Rules for Radicals.

There are eight levels of control that must be obtained before you are able to create a social state. The first is the most important.

1) Healthcare? Control healthcare and you control the people

2) Poverty ? Increase the Poverty level as high as possible, poor people are easier to control and will not fight back if you are providing everything for them to live.

3) Debt ? Increase the debt to an unsustainable level. That way you are able to increase taxes, and this will produce more poverty.

4) Gun Control? Remove the ability to defend themselves from the Government. That way you are able to create a police state.

5) Welfare ? Take control of every aspect of their lives (Food, Housing, and Income)

7) Religion ? Remove the belief in the God from the Government and schools

8) Class Warfare ? Divide the people into the wealthy and the poor. This will cause more discontent and it will be easier to take (Tax) the wealthy with the support of the poor.

Since Alinsky died 43 years ago and many of these issues seemed very contemporary, I looked up these assertations on Snopes and found out that they were really a re-write of some anti-communist literature that had nothing to do with Saul Alinsky or his book.

Curious as to why the right wing nuts would have taken this approach to discrediting Barack Obama, I checked the book out from our local library and read it cover to cover. It turns out that Alinsky was not even really a Marxist. What he was was a very effective community organizer that scared the bejesus out of rich people. He does use stories from the bible fairly often to illustrate a point. He even has several stories about working with people in the Catholic Church. In one he was asked by some newly ordained priests how to keep their faith while trying to change the system. His response was “When you go out that door, just make your own personal decision about whether you want to be a bishop or a priest, and everything else will follow.” (Page 13)

In another he is talking to a bishop about the right to birth control. Outside the office while they are meeting are several celibate priests waiting for an audience. The bishop tells him that the Catholic Church does not condone any form of birth control. Alinsky opens the door to the waiting room, gestures to the priests and says something to the effect of “Is that so?”

Amazingly his predominant advice is not to come into any situation with a preconceived idea of what is going on or what to do about it. For instance he says “If you respect the dignity of the individual you are working with, then his desires, not yours; his values, not yours; his ways of working and fighting, not yours; his choice of leadership, not yours; his programs, not yours, are important and must be followed; except if his programs violate the high values of a free and open society.” (Page 122)

He does have some actual rules in the book in the chapter on Tactics.
1. Power is not only what you have but what the enemy things you have.
2. Never go outside the experience of your people.
3. Whenever possible, go outside the experience of the enemy.
4. Make the enemy live up to their own book of rules.
5. Ridicule is mans most potent weapon.
6. A good tactic is one that your people enjoy.
7. A tactic that drags on too long becomes a drag.
8. Keep the pressure on.
9. the threat is usually more terrifying than the thing itself.
10. The major premise for tactics is the development of operations that will maintain a constant pressure upon the opposition.
11. If you push a negative hard and deep enough, it will break through to its counterside.

He quotes Christ “He that is not with me is against me.” (Luke 11:23)(Page 139) This was an example from the story of Christ throwing the money changers out of the temple which many believe was the act that earned him the deadly attention of the Romans.

He always advised people to do things that were legal. Actually his advice could be used by any group, even a religious one that felt it was being ignored by authorities. The book has a lot of great stories about incidents in Alinsky’s life. I won’t try to repeat them all here. The real question remains as to why neo-McCarthyists picked this man and his book as a cardinal example of the great evil of progressive politics and went to the trouble to lie so extensively about it. I think there are two answers. One Alinsky was irrationally demonized in his time and an older generation remembers that sensation more than any actual facts. Secondly, it was so long ago that outright lies about him would escape casual scrutiny.

Ironically, Alinsky admits in the first chapters of this book that in order to accomplish change, you need to pick a target and exagerate the evil character of that person. If you do not, he (or she) will blame the system or some other partially responsible person who will further blame another etc. and etc. for the problems you are addressing. If you pin the problem however on just one person, others who share the responsibility for the situation will swarm to that person’t defence. By negotiating with that group, some actual changes can be accomplished.

In that light, the real target here is not Alinsky, but Obama, and in targeting Obama any liberal thinkers are painted with the same brush. Personally, I have several objections to Obama’s policies myself. I am very concerned about his allegiance to chemical companies who are poisoning us with pesticides and herbicides that other counties have banned. I think the Trans Pacific Partnership (TPP) is a formula for world domination drawn up in secret by huge corporations who strive to be outside the control of any government. All the wedge issues thrown into these lies about Alinsky are designed to prevent ordinary people from organizing themselves over real issues that will shape the world for generations to come. More than ever, we need to approach Alinsky’s book with open eyes and without preconceived ideas so that we can become organized.

Posted in Blogs on 11 April 2015 by barrecavineyards
3 Comments »

3 Responses to Rules for Radicals