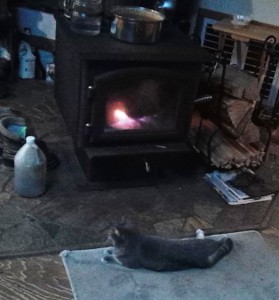 The weather is back to winter normal. It was 19° this morning, the coldest temperature since January 2nd (16°) but none of the rain or snow that was predicted. The grape vines are still dormant. They respond to ground temperature more than air temperature.  The canes still have pock marks from a hail storm last June. Many have died back from the sudden freezes last November. Hundreds of pine cones are dropping from our big old Ponderosa Pine trees but the pine nuts are few and far between. So the natural world is struggling to survive, renew itself and thrive again.

Inside the office, it is much the same. Every day seems to bring some new technological challenge. The new Adobe Readers make a mess of my map book files when they try to print them. But Adobe won’t let you download a good old Adobe Reader 6.0 or anything less than Adobe Reader 10. While installing files on a refurbished Windows 7 computer for Cheryl, it caught a virus and the whole system had to be scrubbed and re-installed.  After weeks of failed attempts and dodging unwanted downloads, I found an installation file for Eudora 7.1 (discontinued in 2009) so Cheryl can look at saved emails. I also found a program that could retrieve her Gmail password from her old Eudora installation. It had both an English and a Russian version. That’s got to make you nervous. but it worked. 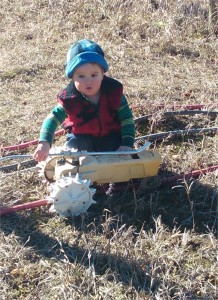 James checking out the Rain Train

Then there was the new Hughesnet Internet connection that seemed to only work for 5 minutes at a time on two of our 3 main computers. I was close to dropping Hughesnet completely when a firmware upgrade to our wireless router solved the problem. It’s been a rough winter indoors and out.

But with exasperating technology also comes new opportunities. The most exciting is Avenza Maps. I found out that my 2012 Geographic Information System software, MapInfo, should be able to produce PDF maps that when opened on a smart phone show you where you are on the map, even when you are out of range of a cell tower (which is almost everywhere around here). But it took 3 hours of tech support for my first MapInfo support guy to call his MapInfo support guy and finally get MapInfo to produce those files. The local Tricounty Economic Development District is pushing me to make these PDF maps for all of the 140 or so trail maps now on my website plus many more maps for 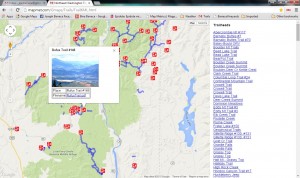 ATV use, historical sites etc.  That would be seed money for a trails website that may eventually support itself.

A pretty cool application of this smartphone map app is to help firemen map hydrants and find addresses on smartphones and tablets. I am working with biggest fire district in the county to make that happen.

The Heritage Network is negotiating with Stevens County to manage the Crossroads on the Columbia Digital Archive that we built with help from many volunteers from 2011 through 2013. Even though nothing has changed on it for well over a year, use has grown from 11,000 hits per year to over 24,000. The goal is to make that site also pay for itself.  But first we have to get official control from county government, which is proving to be a nightmare.  At least they would be paying $200/year to keep the website on line if we get a contract signed. 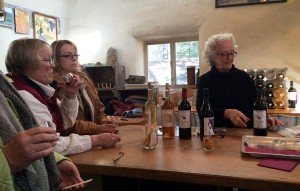 Another project funded through Map Metrics is an interactive historical map of around 150 places in nearby Pend Oreille County.  When complete, you will be able to click on an icon in a Google Map and see pictures and stories about that place.  A smartphone map tour of those same places is a natural offshoot project. 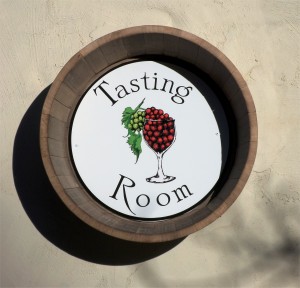 Meanwhile, back at the winery, the tasting room is improving with barstools and pictures from Sicily, including a panorama taken from the Castelbuono castle that Giuseppe Cicero gave us as we left there in 2010. We had sold down our inventory of bottled wine to less than a case each of several varieties.  But over the last few weeks enough wine has stopped working that we were able bottle many more cases from years 2012 and 2013.  Even more is ready to bottle, but right now there is not enough time.

Speaking of young growing things, my daughter April visited with our grandson, James Houston, on the last day of the month.  James had a great time playing ball with the dog and running around.  We checked out the vineyard and later went out for music and pizza at a benefit for the local food 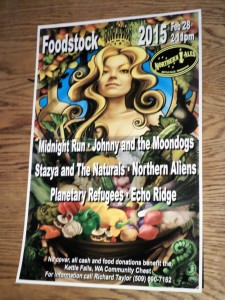 The annual Panorama Gem and Mineral Club rock show is coming up this weekend.  Two weeks after that I will be selling and talking about grape plants at the Colville Home and Garden Show.  A garden club has already visited the winery and vineyard and other people have come to look over the available plants, so Spring is just around the corner, even if not quite here yet.  Ready, set, grow!