The Little and Big Islands 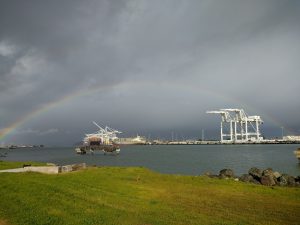 It is unusual for us to take a full two week vacation, let alone to fly thousands of miles in the process. But we got a chance and we took it this spring to see the Big Island of Hawaii. But first we stopped by the little island of Alameda to see our daughter Bina and her family. So this blog is all about our trip. The next one will get back to pruning, planting and selling grape plants. (We have lots of photos from this trip and although there may be only one or two in the stories, they have links to albums of each adventure.)They were very good to us and over a couple of days we took a ride on the Alameda Ferry to San Francisco, explored the Exploratorium with our grand-kids, Ovid (now age 9) and Nala (age 6). Then we got a tour of Kite Boat, a cutting edge research and development workshop on the old Alameda airbase. Son-in-law, Joe Brock, is a major 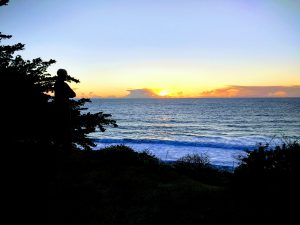 designer, builder and sailor of ever bigger, faster and more sophisticated versions of these craft. They are also bringing to market electric-powered hydrofoil paddle boards, a fun place to work and to visit. We went with them to the Oracle Center in Oakland and got free seats and a meeting with Loren who played “Ariel” the Little Mermaid, a star of the show.  Then we headed out to Half Moon Bay to explore Imagination, their 62 foot ketch (a two-masted, fore-and-aft-rigged sailboat with a mizzenmast stepped forward of the rudder and smaller than the foremast.) They are making an amazing transformation of this boat into something they can all both live on and sail on. It will actually take a crew to put it under full sail, and they are growing their own. 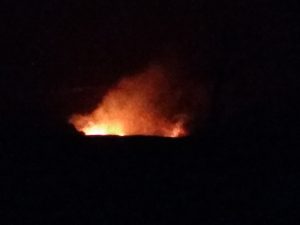 After an early morning liftoff from Oakland and flying over an ocean of clouds we arrived in Kona airport on the West Side of the Big Island of Hawaii under a bright Hawaiian sun. As the locals often told us, there are 13 distinct climates on the island, and we soon drove out of the noon-day sun over vast landscapes of barren lava through a pass between the snow-capped peaks of Mauna Loa and Mauna Kea into the fog and Vog (Volcanic Fog) near Hawai’i Volcanoes National Park. Joe’s old high school classmate, Mike Klungness, and his wife Gretchen put us up for a few days in Mountain View and showed us the sights. By far the most spectacular was the active caldera of Kilauea Volcano. During the day we could see red flashes of lava in the smoke. Back at the Jagger Museum viewpoint that night it was even more spectacular in the red glow of molten lava. After hiking through trails and the Thurston lava tube during the day we ate out at the Volcano House Lodge with the volcano right out the window. 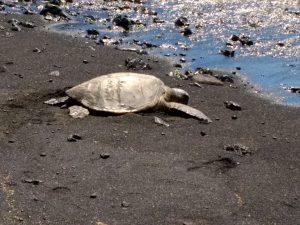 In our first adventure in our big black rented Jeep Wagoneer we stopped at the Black Sand Beach south of Kilauea. The hot sun, coconut palms and ocean breeze were a welcome change from the clouds where we were staying in Mountain View. The biggest attraction on the beach was a large sea turtle that at first looked dead but was just resting and sunning itself, much like most of us on the beach. Someone drew a line in the sand around it to keep tourists back. Eventually as the tide came in, it swam into the ocean. There is a short movie of that in the album linked to the picture. On the way back to the highway we spotted some Nene, the endangered native geese. 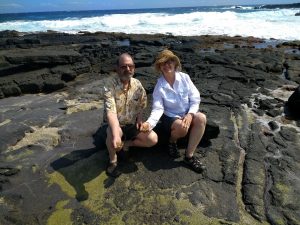 Joe and Cheryl with green Sand

One of the reasons for the 4-wheel drive car was to manage the ruts on the drive to the Green Sand Beach near the very southern tip of the island. Once we got there we abandoned that idea. The “ruts” were several feet deep, often with mud at the bottom and their routes crisscrossed over the 2.25 mile drive to the beach. The car stayed clean and we paid for a ride in “Uncle Eddie’s” beat-up pickup truck. It was a great ride, part tour wagon and part roller coaster. The green sand is made from translucent Peridot crystals. The sandstone there is full of them and they seem to float to the surface of the black lava sand. Peridot is the green gem featured in the Moana Movie  that no one is supposed to take from the island. We tried not to but inevitably we brought back some green sand that stuck in our pockets. 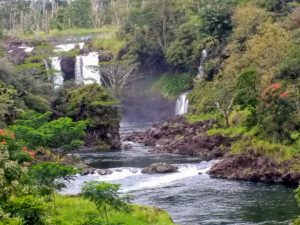 Mike also guided us around the city of Hilo. Liliuokalani Park, right on Hilo Bay, has spectacular Banyan trees, lush lawns, spreading monkey pod trees and an expansive view of the ocean. Nearby is Rainbow Falls rich in legends and beauty. Upstream from it is another gem that many tourists miss called Boiling Pots. It has waterfalls, a grand tropical river vista and it’s own set of legends. Everywhere we went Hawaiian native culture was being interpreted. It is not just another State. It is the Hawaian homeland. We learned more about the local food at the farmers market where we picked up supplies and sat down to eat. I had Green Papaya stir-fry. 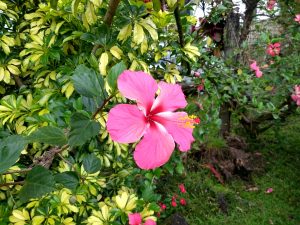 We spend 4 days in this area, 2 in Pahoa and 2 with an old friend from Rose Valley, Eric Rosse at his spacious and substantial house in Kehena, right near another Black Sand Beach. This one is “clothing optional”, not a big attraction for old folks, but a beautiful beach with no improved access. In the morning with sun streaming in from the east and a few fishermen it is quiet and warm. If you really want warm, just up the road is Ahalanui warm pool park. The water there is geothermally heated. Colorful fish swim with you and nibble dead skin off your legs if you stand still. Another inlet just north of Ahalanui, the Champagne Ponds, is also fairly warm and it’s shallow waters are dotted with tiny islands and tide pools perfect for snorkeling, which I will learn to do if I ever get that chance again. We did do some dining and shopping in Pahoa, a somewhat rustic tourist town. It did have a great natural foods store, cute shops and a variety of restaurants. But staying with Eric was the best. We played Scrabble, ate BBQ every night, shared stories and just relaxed. 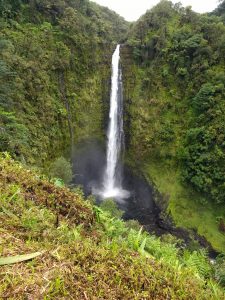 From Kehena we drove north on the Mamalahoa Highway along the coast, stopping at beaches and waterfalls, the most spectacular of which is ‘Akaka Falls, a 442ft sheer drop with a fascinating fish, the o’opu alama’o, a 5 inch long species of goby. It spawns above the falls, the young are flushed to the ocean and then they climb back up using a suction disk on their chest and pectoral fins when it is time to return. We also stopped at the Laupahoehoe Point Memorial dedicated to teacher and children at a school near the beach who died in a Tsunami on April 1st, 1946. These islands are generally pleasant but once in awhile a tsunami, hurricane or lava flow will just plain wipe things out. We were pretty tired when we arrived at our last stop, an AirBnB in the hills near Kalopa State Park above Honoka’a on the north end of the island. It has a spectacular vista of the ocean when the clouds lifted enough to see it. This Part of the

island gets 200 inches of rain a year.

Honoka’a is a little spiffier tourist town than Pahoa, but not as commercial as it’s neighbor Waimea. We ate at Il Mundo, 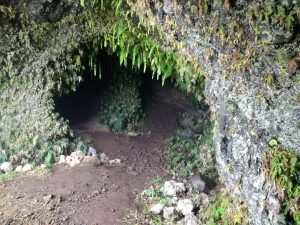 a great Italian restaurant, bought some earrings at a very nice local art and glass gallery and went exploring on the old Mamalahoa highway for a lava tunnel, just known as Cave #3 on our GPS tour app. We found it with a little help from some locals. It was very foggy and rainy outside. Cheryl elected not to explore the cave which had some structures built by early Hawaiians and a lot of branching tunnels and passages. Taking pictures inside was tricky and I basically failed. It reminded me of many local abandoned mines. Back at the AirBnB we basically vegged out along with Louie the friendly house-dog and Layla the cat, both of whom liked to snuggle up with guests. The next day we explored nearby Kalopa State Park hiking a nature trail that was wet (as well as the pieces of a guide book for it). The sun came out in the afternoon and we enjoyed it along with some geckos at the B&B. 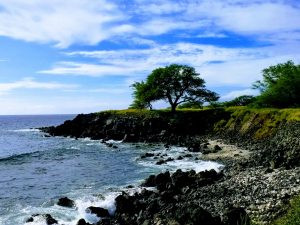 Our plane left at 10 PM on Wednesday March 14th. We spent the day sightseeing on the way from Honoka’a to the airport. That included a statue of Kamehameha in Hawi that was recovered from a shipwreck; a trip over Kohala mountain that had wide-open ranch land and prickly pear cactus and a hike along what was once a railroad line for a sugar cane mill at Mahukona Beach. We watched a school of Yellow Tang fish near the old loading dock, spotted several feral cats and (as happened every day we were there) a mongoose or two. We ate our final Hawaiian meal at the Sea Bar Restaurant in Kawaihae, turned in the jeep at the airport and waited in 80 degree heat at the outside boarding area for Alaska flight 880 to Seattle. Not our usual first two weeks of March but ones we will remember more than the rest. Aloha!