The Shape of Winter

We survived the moons of January and the moon is full again now at the end of February. Luckily we can see it at night so far but tomorrow will bring another two days of big snow. I would like to think of winter as a time to kick back a little indoors and catch up on reading, writing and arithmetic. A lot of that went on this month. But kicking back, not so much. 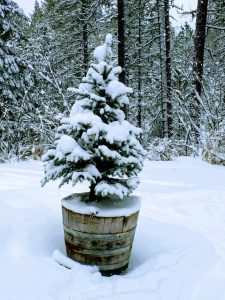 Here is our Christmas Tree with a new decoration.

The weather started to break at the beginning of the month with temperatures above freezing and patches of bare ground growing beneath the trees. On February 4th, Super Bowl Sunday, it was still 46 degrees at 8:55 PM. In a memorable game, the Philadelphia Eagles took down the Patriots in the highest scoring game in Super Bowl History. It included a great play at the end of the first half where Eagle’s quarterback Nick Fole received a pass in the end zone. That was the first of many sports events for the month since the winter Olympics started 4 days later and provided their share of excitement.

Cheryl took all of the ornaments off our live Christmas tree and I moved it outside. But it didn’t take long for Nature to re-decorate it with fresh snow. Winter was not finished with us and continues to build up snow depth.

My other business is Map Metrics. Winter is a good time to update maps since no new roads are being built. So far this winter I have new editions of the Road Atlases of Bonner County, Idaho and Ferry County, Washington. 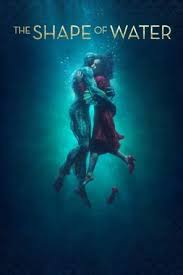 Cheryl and I went to some movies leading up to the Oscars. They included “The Shape of Water”, a title that is a little hard to wrap your head around. (Also 3 Billboards…, Greatest Showman and Black Panther.) The comeback of winter was also hard to understand. Heavy snow blew in sideways on the 17th and then temperatures went down to the single digits for 5 days from February 19th to the 24th. They have rebounded somewhat since then but by the time this is posted another foot of snow is predicted in the valleys. The snowpack in the mountains is 30% above average already. We may be looking at more floods again but hopefully fewer fires and enough water to fight them. 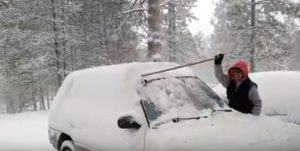 The blowing snow is hard to see here but was definitely there. Click for video.

Meanwhile some of my two-year old wines are ready to bottle. They included the first vintages of Siegerrebe and Muscat from Downriver Orchards. These are beautiful clear and semi-sweet organic white wines. Some say the Siegerrebe tastes like strawberries. The Orange Muscat definitely has a bit of a citrus flavor. I’ll be sipping them and planning out my pruning and planting strategy while we wait for this snow to melt. 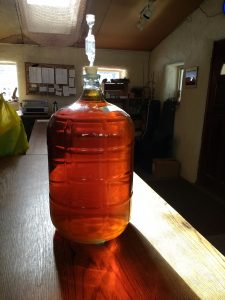 Posted in Blogs, Products, Wine Making on 28 February 2018 by barrecavineyards
One Comment »

One Response to The Shape of Winter